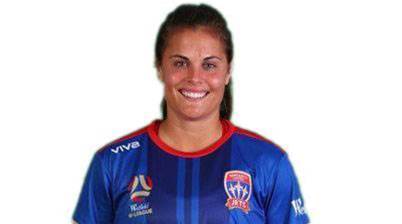 It's heartwarming to see the league's only standalone W-League club ramp things up a notch with flashy imports this season, especially after Heather Garriock's side limped into eighth place last time around.

They may be as top heavy pinwheel but Garriock's hoping if they spin fast enough they can swallow up every opponent around them. And you know what? With Katie Stengel barging her way though opposition defences this season they might have a point...

Stengel is set to become the league's most formidable striker this season, as she brings a wealth of W-League and international experience to the side. She also follows this pattern of recruiting US stars in their peaks, another 27-year-old in red-hot goalscoring form who's one of the top picks for the golden boot this season.

But she's not alone. Simone Charley's arrival may have gone a little under the radar (to be fair, it's their fourth big-name striking signing, there are only so many adjectives you can put in a headline) but she shouldn't have.

Charley is another Portland Thorns import who brings youthful exuberance and big-game atmosphere to Canberra. She may still be at university but she's spent a year competing in front of 20,000 packed crowds in NWSL finals against the best players in the world.

“The NWSL gave me the opportunity to learn a lot from some of the best players in the world.

“Just the knowledge and experience I’ve gained from there is something I believe I can build off of while in Australia."