It was the game that had everything; dropped catches, the third umpire overturning decisions, super overs and a four over spell by a 16-year-old bowler for the Melbourne Stars.

The Renegades were given the ball for the first innings and were confronted with Liselle Lee who continued her successful tournament with her trademark big hitting, a true combination of power and controlled placement.

Tahuhu claimed the first of the wickets, bowling one short. Lee was the next to depart in the seventh over as Molly Strano claimed her 50th WBBL wicket and Du Preez followed Lee back to the sheds in the next over.

A few overs of tight bowling and fielding by the Renegades and all of sudden the Stars’ run rate had dried up completely and found themselves at 5/80 after 15 overs.

The Stars finished with 118 after late innings cameos from Alana King and Anna Lanning.

Inglis and Molineux opened the batting for the Renegades.

In the second over Inglis was run out, confusion between the two left Inglis short of her crease. Koski joined Molineux in the middle and a combination of Koski’s power and Molineux’s clean hitting had the runs ticking over and kept the required run rate down without too much risk.

The former Renegade took the big wickets of Molineux and Britt in the first over of her spell. Not only was Sutherland able to take the big wickets, she was able to completely shift the momentum of the match as the Renegades were just unable to score runs off her.

At the end of her four overs, she had figures of 2/11 which included a massive 14 dot balls.

After some drama in the 13th over with a third umpire review, Satterthwaite was called back to the middle having originally been given out by the on-field umpires.

The Renegades required six runs off the final ball of the innings to send it to a super over.

Satterthwaite launched the ball over the fence and send the game into a super over.

Given their ability to score runs earlier in the innings Koski and Molineux opened the batting for the Renegades in the super over.

Alana King was busy down on the boundary taking consecutive catches of Koski and Molineux and a causing run out the following ball.

The Renegades finished their super over with 4/10.

The Stars sent Liselle Lee and Mignon Du Preez out to face the Hayley Jensen super over. Lee and Du Preez did enough, hitting singles and twos to end their super over at 0/10.

With both teams scoring the same amount of runs, Melbourne Stars came away with the win because they scored the more boundaries in their initial 20 over innings. 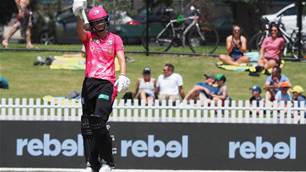