The NSW Waratahs have beaten Queensland 8-5 in a fiercely contested, but mistake-riddled Super W final at Leichhardt Oval.

During the opening minutes of the match, NSW had great field position off the back of a great clearing kick deep into Reds territory from Hewson.

NSW won the lineout through Grace Hamilton and from there, they piled on the pressure.

A penalty by Queensland ensued at the breakdown and Hewson slotted it over for a 3-0 lead.

It was de ja vu from the restart, as NSW were soon back in Queensland territory courtesy of another clearing kick from Hewson.

NSW were 15 metres out from the Queensland line and it appeared they may score, but Queensland turned over possession and they created an overlap down the blindside from a maul, from which Alana Elisaia made a break and then kicked ahead when Hewson was coming across in cover.

Ash Hewson used all of her years of on-field knowledge by cleverly putting her body on the line.

This halted Elisaia's progress, with Maya Stewart beating Elisaia to the ball, but rather than dive on the ball, she shepherded Elisaia off the ball, which earned Queensland a penalty and Stewart a yellow card.

Not long after Elisaia scored down the blindside where Stewart would have been and Queensland went ahead.

After the restart the Waratahs women had the better of field position and possession and two tries were butchered, one where all Stewart had to do was pass to Leaupepe in support and NSW would have scored.

NSW was having trouble executing backline plays, due to the great defence from Queensland and possibly from a bout of nerves of striving for perfection, which had been their pre-match mantra all week. 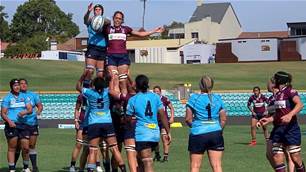