Despite suffering a 17-run loss against England in the final match of the Women's Ashes in Bristol, Elyse Perry was full of optimism after a dominant series.

The Brits narrowly avoided a whitewash with the last-ditch win, but it was largely consolation as Australia won the Ashes thanks to a 12-4 points series win.

Superstar Elyse Perry, who was a clear standout among the dominant Southern Stars, said that it was a bittersweet way to end the tournament, but could only remain positive with the overall result.

"Look, it's a hard one, because in the grand scheme of things, we've been absolutely brilliant," she said.

"We had a quick moment after the game to really recognise that. But in the same vein, you're only ever as good as your last game.

"So it sort of feels a little bit like we missed a trick tonight, but also against a very good side. We've been saying that all series. I think they showed tonight that they've still got plenty left in them.

"It's probably a nice little reminder for us that we still have to keep working and push further to make sure that we are still dominant when it counts."

Needing to better England's 5-139 to finish the Ashes undefeated, Australia reached 24 before opener Beth Mooney (2) was dismissed by Katherine Brunt.

Captain Meg Lanning could only manage two before being dismissed, with opener Alyssa Healy (28) falling not long after at a crucial time for Australia.

Ashleigh Gardner (0) also struggled to get going, but Ellyse Perry (60*) dug deep to anchor the innings.

Perry started running out of partners however as England's bowlers tightened the screws, sending the required run rate above 12 an over.

The total proved too much for Australia who fell 17 run short of victory, handing England its first win of the series.

"I got one boundary away, and then just couldn't back it up," Perry continued.

"We really needed a big over of like, 20 to get us into the game. So yeah, it was a bit frustrating, but just one of those nights and as I said, they played really well.

"I thought we actually bowled really well, we just probably just never got going with the bat. So it's just one of those months.

Speaking on a fantastic tournament, Perry credited her performances to her coaching staff.

"I've worked with Ben Sawyer for a number of years and I absolutely love working with him. I think it's paid dividends for me and for the other pace bowlers.

"If you look through the series, the difference between the two bowling sides was that we bowled with a lot of shape at times and really challenged England, especially early.

"I think that's a huge credit to Ben and the work that he's done."

Reflecting, Perry said it was a very special series for her side which will be well-celebrated tomorrow.

"I think we were really came to recognize what's been a special series for us," she said.

"With contributions from like so many players across the board so I'm we're away from home have had lots of fun. So I think there's there's a lot of reasons to celebrate tomorrow." 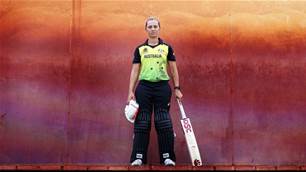 Batting for my culture: Gardner's role model for Indigenous Australians