Sydney FC forward Remy Siemsen says her side is under no illusion as to the task at hand when they travel to face Adelaide United in the final round of the regular A-League Women season on Sunday.

The Sky Blues can clinch a second-straight premiers' plate with an away win after leading the league all season, losing just once and scoring 35 goals across 13 games.

All their hard work could go to waste, however, if second-placed Melbourne City beat the Western Sydney Wanderers on Saturday and Adelaide claim a win over the Sky Blues on Sunday.

"At the start of the season we set a collective goal that we wanted to be lifting not only the premiership trophy but the championship as well," Siemsen said.

"We know how important this game is against Adelaide and they've had a great season.

"They're a really competitive team and they have quality right through the team but the focus is on us and trying to do our jobs really well.

"I think this team is special and if we continue putting our best performances together we can achieve what we want to."

Siemsen is hopeful of having fellow forward Cortnee Vine on deck after she picked up a knock in last week's win over Perth.

"She's been training and she seems totally ready to go," Siemsen said.

The last three weeks of the season have resulted in Sydney losing their unbeaten tag.

After playing the majority of the season in NSW, they lost to Melbourne City and drew with Melbourne Victory on the road in Victoria.

Ahead of the trip to Adelaide, Siemsen dismissed the suggestion that there was a link between playing interstate and the Sky Blues dropping points.

"With the scheduling we had three games in six days and that definitely took its toll on us," she said.

"Even in those games when we dropped points we played some really good football, especially in the Victory game. It was probably a glimpse of what we can do in the finals.

"It has been difficult having a lot of travel and the short turnarounds definitely weigh on you but I'm really proud of the girls with the amount of games in such a short space of time." 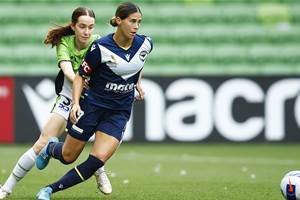 Melbourne Victory have qualified for their fourth straight A-League finals campaign despite being fortunate to hold Canberra United to a 0-0 draw.