Melbourne Victory have qualified for their fourth straight A-League finals campaign despite being fortunate to hold Canberra United to a 0-0 draw.

Melbourne Victory only scraped into the A-League Women finals after surviving a determined Canberra United effort to secure a 0-0 draw on Friday night, but coach Jeff Hopkins remains confident they can mount a title push.

Victory's best chances in the clash at AAMi Park arrived very late and after a number of Canberra opportunities, the home side nonetheless escaping with a share of the spoils to move them onto 24 points in the final standings.

Perth Glory downed Wellington 3-1 in a simultaneous kick-off in Wollongong to also end on 24 points but with their goal difference seven back of Victory.

Victory now find themselves staring down the barrel of a visit to red-hot Adelaide United in the first week of the finals - a side that beat them 3-0 at Coopers Stadium a week ago.

The Victory will play in the finals, the Glory will not.

It's a cruel sport, sometimes.

Nonetheless, coach Jeff Hopkins believes there are enough nascent signs, especially with the benefit of added rest, for hope.

"Having another six, seven-day break... we'll be much better for it. Fatigue really does affect the way we play.

"We went to Brisbane last year after losing 6-0 to them and then put six past them. We've been there, we've had to do two away trips to win it so that side of things doesn't phase us."

Led by A-League record-holder for goals Michelle Heyman, Canberra's frequent forays forward in transition forced Victory to frequently desperately scramble to avoid defeat - as well as ride their luck on a few occasions.

Victory goalkeeper Dumont was best on ground for her side, with her intervention key in keeping Victory in it and allowing their late chances to Harriet Withers, Kyra Cooney-Cross and Catherine Zimmerman to almost win it.

After at one point looking set to claim the wooden-spoon, Canberra United are undefeated in their last four and finished sixth on the table.

Unfortunately for coach Vicki Linton, A-League's long offseason means it will be difficult for them to capitalise on their late momentum heading into the 2022-23 season.

"I don't think (momentum) can with a big off-season," she said.

"There tends to be turnover.

"In my last two seasons we've had to start from scratch and it's taken all this time to get players that have come in really bedded in." 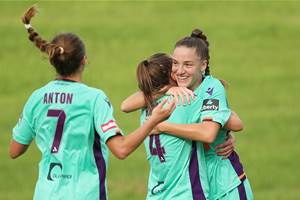 Perth Glory have missed out on an A-League Women finals spot despite a 3-1 win over Wellington Phoenix on Friday.