A review of the Matildas' disappointing Asian Cup campaign won't be used as a 'witch-hunt' against individuals, including coach Tony Gustavsson.

Australia's quarter-final exit to South Korea at the continental championship in India in January is being assessed by Football Australia (FA) with recommendations likely to be handed down to the governing body in the next few weeks.

FA chief executive James Johnson says his organisation is prepared to accept the outcomes of the review but insists it is not a process aimed at pinning blame on Gustavsson or any other members of the staff or playing squad.

"We're having conversations with the players, with the staff, with the coaches and the technical experts about what we did well and what we did not do well in India," Johnson told the Australian Associated Press.

"In the next two-to-four weeks we'll have some practical outlooks which will be in form of recommendations and we'll accept those and move forward and grow as a team and an organisation in doing so.

"This process is not a review into any particular person, including Tony.

"It's about trying to be open and honest and having dialogue about things that weren't good enough and weren't up to scratch.

"It's certainly not a witch-hunt for any individual."

Johnson was in Canberra on Tuesday to announce the Matildas will be playing in the nation's capital for the first time in nine years on April 12 in the second of a two-match friendly series against New Zealand.

Those matches will be the first since Australia's Asian Cup exit and the beginning of a series of crucial friendlies in the lead up to next year's Women's World Cup on home soil.

"It's important for the team that we get the performance back up to scratch and it's also important because we're playing against New Zealand who are co-hosts of the Women's World Cup.

"From a performance perspective, it's against a good team and we need to rebound after the Asian Cup."

The first match of the series against the Football Ferns will be on April 8 at a venue to be announced before the second game at GIO Stadium. 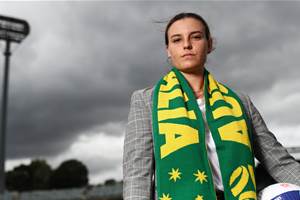 Gustavsson warns Matildas: 'We need to show up tomorrow'

Matildas coach: 'If you have made up your mind already about me or the team, it'll be 'yeah, yeah, but they had players out'