Unfortunately, it's actually quite unheard of in the industry. Over the course of history, it's been a male-dominated sport, there is no hiding that.

However, Kelly Racing is trying to change this with experienced drivers Chelsea Angelo, Molly Taylor and Simona de Silvestro part of their team for 2019.

"The way they all go about it, the girls that we've got in our team, it's good to be able to work with them, they are doing a great job," retired driver and fulltime owner Todd Kelly said.

"The morale in the team is outstanding but I think the whole dynamic of how our team works has slightly shifted from having a completely male-dominated sport to a good ratio.

"The way everyone goes about their job and behaves, how they work and compete against each other has changed and improved."

De Silvestro is the most experienced out of the trio. The 30-year-old became the first full-time female driver in the Supercars era in 2017 when she joined Nissan Motorsport.

"Being on the team and having Molly and Chelsea, it's great to see more girls involved," she said.

"I think it's good to get that opportunity and I think at the end of the day we need to be competitive and the team is working hard on doing that.

"I think motorsport is a great sport in the sense that if you get the results, you should get the opportunity, and think that's a great way to showcase it."

The 30-year-old, who currently competes in the Australian Rally Championship, will make her first mark on a circuit racing championship when she takes part in TCR Series.

"It's nice to see it growing and that there are females in all areas of motorsport getting out there," she said.

"I think the great thing about motorsport is when you get to the race or rally, you put your helmet on and it's all about the job you do inside the car so there's no reason why gender should be an issue." 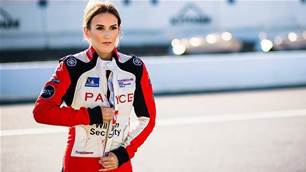