However, it's not just about showing that women can match it with the men and giving women the chance to compete at a high level but inspiring the next generation of young girls.

"We were just sitting on the grid taking images with a couple of little girls, it was really good," Angelo recalls.

"It's good to be able to show that representation to all the young girls out there." 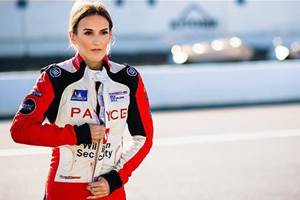 Many might ask: 'Why can't motorsport just give women more opportunities?'

It's a fair question, and sadly there are still cost barriers in place preventing female drivers from continuing in the sport. They could be the most talented driver in the world but if they don't have hundreds of thousands to spare, they might not be able to get into a car.

However, motorsport is also a bit of a different from most sports. Drivers need to be a packaged deal, they need to have the determination to get to the top, be experienced enough to handle the car but also be presentable to sponsors.

After all, they are driving a vehicle that easily cost up to $250,000 and not just anyone can drive the car.

P12 in the first ever @tcraustralia race and I am PUMPED 👌🏼 What a awesome way to start the series. Car balance is feeling close to perfection. Couple more fixes and fingers crossed we should be on it tomorrow 😆 #NeverGiveUp #DareIcedCoffee @dareicedcoffee @kellyracingtcr

Kelly Racing is hoping to continue to be a leader in helping grow female participation in motorsport and bring more women into full-time positions in the future but at the same time, they are realistic about the situation.

“At the end of the day, they need to be doing well in the car and with sponsors to have a deal that is sustainable but even so far a lot of the deals we’ve got commercially, we would’ve never got with a male driver,” Kelly said.

Round 2 of the TCR Series will take place on June 6-8 on Phillip Island while the Supercars Championship continue their season in the Winton SuperSprint today (Saturday, May 25).