The wait for a new Winter Olympics Australian champion is over, with Jakara Anthony having claimed gold on the second day of the Beijing games.  She was one of four Australian women to compete in this discipline.

Jakara Anthony has been skiing since she was four years old.  As a youngster she dreamed of winning an olympic medal.  At 19-years of age she came incredibly close, finishing fourth at her maiden Olympics in Pyeongchang.

At this Olympics in Beijing, it would be everyone else chasing her. Anthony dominated qualification, finished first with a total score of 83.75 and automatically progressing to the final.

In the final rounds, she finished first at every step.  She scored of 81.91 in final 1, 81.29 in final 2 and 83.09 during the medals final besting silver medalist American Jaelin Kauf and ROC bronze medalist Anastasia Smirnova.

Speaking to Seven Network after her win, Anthony could not hold back her excitement:

“It’s really incredible to know that all the hard work that I have been putting into my whole skiing career is really paying off. I’m just lost for words.

“(Handling the pressure) is a real testament to myself and the team around me in the last four years and the really solid processes we follow.

"It really hasn’t been easy. I think that I am a much better athlete and person because of it.”

With the win Anthony became the first Winter Olympic champion since Torah Bright and Lydia Lassila at the Vancouver 2010 Games.

Three other Australians also competed in the women's moguls. Britteny Cox finished ninth in the qualification 1 with a score of 72.26 but was eliminated in the final 1 when she was classed 14th, two below finals 2 qualification.

Will it be enough? Only time will tell... 😅#Beijing2022 #7Olympics pic.twitter.com/WsB3aYynqc

Taylah O'Neill took part in qualification 1 but did not finish.  O'Neill had heartbreakingly torn her ACL four weeks ago.

After tearing her ACL just four weeks ago, she is unable to complete her qualifying run.#Beijing2022 | #7Olympics pic.twitter.com/4Vxx45mQvW 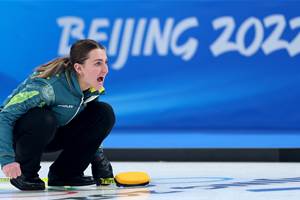 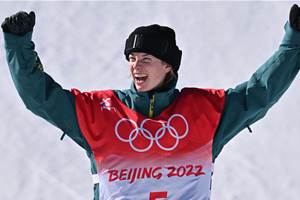