On day 4 of the World Under 20 Championships, Australia's women's 4x400m qualified for the final while their 4x100m side broke a National Record.

In the morning session, race walker Katie Hayward lined up for the 10,000m walk final. The 17-year-old was part of Australia's World Race Walking Team Championships in Tainan, China earlier this year but was disqualified 200m from the line.

She was in the lead group for the first half of the race but at the 6.5km mark Meryem Bekmez of Turkey made a move and the lead group was split. Hayward tried to respond but found herself 30m back and finished fifth in a personal best of 45:10.42.

“I focussed on the people in front so I could get faster and then go by them and try and hold on,” she told Athletics Australia.

Only one another Australian female athlete has recorded a better place and time at the championships and that's Jess Rothwell who came fourth in 2008 with 44:44.22.

The last event for the Australians in the morning session was the 4x400m relay heats as they qualified for the final.

Ella Connolly delivered a 10m lead with a 52.00 run before Cara Jardine continued to pick up the pace to maintain the lead. Jemima Russell was up third as other countries put pressure on her and in the last leg 800m silver medallist Carley Thomas was overtaken by Canada.

Our enthusiastic 4x400m relay girls promise they’ll “see us in the final” after winning their heat this morning. The team, made up of Connolly, Jardine, Williams and Thomas, clock 3:35.48 as they talk us through their success post-race #Tampere2018 pic.twitter.com/rOq1UByqBj

However, she responded and crossed the line first for a time of 3:35.48 after a blistering run in the home straight which sees Australia ranked third behind the USA and Jamaica from the heats.

In the evening session, the 4x100m relay team of Nana Owusu-Afriyie, Kristie Edwards, Samantha Johnson and Mia Gross broke the national U20 record. Their time of 44.78 seconds, which saw them finish seventh, beat the previous record of 44.86 set at the championships in 2004.

“I am just so proud of us. We got the baton around and that’s what we wanted to do," said Owusu-Afriyie.

Want the full story? The AUSTRALIAN U20 4x100m girls have broken the RECORD in a time of 44.78 that has seen them finish 7th here in Tampere.
The team of Nana Owusu-Afiyie, Kristie Edwards, Samantha Johnson, Mia Gross talk us through the team event. pic.twitter.com/pKasvvVPRD

"The icing on the cake was the Australian record," she said.

They snuck into the final with a run of 45.26 after disqualifications to the United States and China.

Lateisha Willis and Samantha Johnson have finished their World U20 Championships in the semi-finals of the 100m hurdles. Willis, who had a quick heat, was off to a good start but the top athletes shined and were able to pull away.

She finished with a time of 13.93 seconds for 23rd place overall.

“It feels pretty good knowing I am running consistent and my training is paying off," she said.

Johnson also got out well in semi-final two and while she ran quicker than her heat time, she finished the championships ranked 20th for the hurdles. 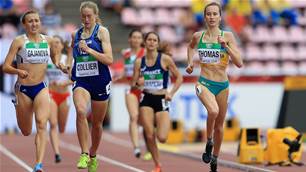