Wallaroos fullback Samantha Treherne is the only debutant in the Australian Women’s Sevens squad for the opening round of the Sevens World Series in Colorado next weekend.

The 24-year-old impressed Australian Sevens selectors playing for the Wallaroos in the two Test Series against New Zealand in August before backing it up with a strong performance for Griffith University in the University Sevens Series.

Griffith currently sit on top of the Series ladder after two overall round wins in a row.

Born in Melbourne, into a family that is a household name at the Footscray Rugby Union Club, Treherne moved to Brisbane where she linked up with Sunnybank and made her Wallaroos debut against England in 2017.

“This is an exciting time for Samantha to get her first cap as an Australian Women’s Sevens player and she has been a great addition since we brought her into our setup," coach John Manenti said.

“The entire squad has been working really hard to make sure that we are getting every detail of our preparation right for round one and we are looking forward to playing Rugby again,” he said.

In more positive news for Australian Rugby Sevens, wingers Emma Tonegato and Ellia Green have committed to Rugby Australia until 2020.

Green and Tonegato were part of the gold medal at the Rio 2016 Olympic Games, where they both scored tried in the final against New Zealand.

“It really is amazing coming to work every day, playing Rugby with my best mates and the culture we are building with this team is really strong," Tonegato said.

“We’re coming to the end of a tough pre-season as we get ready for our Olympic qualifying year and we’re looking forward to getting back out there on the park on the HSBC Sevens World Series,” she said.

While the team will be without Emma Tonegato, Alicia Quirk and Emilee Cherry who are all recovering from off-season surgeries, co-captains Shannon Parry and Sharni Williams return to full fitness to lead the squad as Olympic qualification commences. 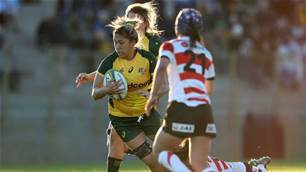