Wallaroos gaffer Daniel Nestor has named his squad for the upcoming clash in Eden Park and he's trying to remain as upbeat as possible about his side's chances...

Following another thumping by the Black Ferns on home turf, things aren't looking good for the Wallaroos heading into the reverse test on Kiwi soil

Nestor's chances for change are probably a little lighter than he would have hoped, but he's still swung the axe twice; with Shannon Mato and Mhicca Carter promoted from the bench.

“We were disappointed with the performance we put out last week as we know that wasn’t our best Rugby," Nestor said.

“The good news is that we get another opportunity this week and the team is looking forward to getting back out on the park and playing at one of the most iconic venues in World Rugby.

“Bringing Shannon (Mato) into the starting side, just changes things up for us a bit in the backrow and we know Mhicca (Carter) has got some explosive speed that can match her opposite numbers.

“The team has responded really well this week to the feedback that the coaching staff has given and we’re looking forward to getting back to playing Test Rugby.” 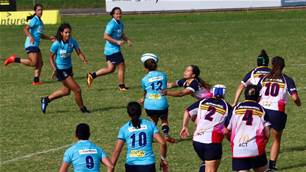 It runs in the family for Lafai