Nine weeks later and things are starting to look up for the players after a draft was released by Football NSW on May 19 illustrating the safety guidelines teams must follow for when they are able to return to training.

That means we might not be that far off from seeing round two being played. So what have these players been up to in the meantime?

Unable to train together, as well as having no access to gyms, has meant that players have had to find new ways to stay fit. They've also been handed programs to complete, in order from them to be ready for when football eventually resumes.

However, it has also given the players an opportunity to find new hobbies away from football to help fill their time in isolation, including study, spending more time with family and of course, the obligatory giving painting a go.

For current club champions, and 2019 premiership and championship winners, Sydney University, it also means players putting those dreadful running programs to good use, choosing to participate in the May 50K to help raise awareness and funds for life-changing Multiple Sclerosis (MS) research.

It all started as a thought on a zoom chat that eventually snowballed to include 14 players from both, first grade and reserve grade, signing up to run 50km each in the month of May to raise money and support to find a cure for MS.

Sydney University and Newcastle Jet's star midfielder, Clare Wheeler, said that by joining such a worthy cause together it has allowed the players to stay motivated and connected, not only to one another, but to something bigger than themselves as both footballers and leaders.

“It has been a great opportunity for the team to remain active in a somewhat connected environment, also connecting the team and club to something greater than ourselves," she said.

"It’s been great that despite the restrictions of COVID, the club and its players are still able to contribute.”

This extended break from football is something that many players have never experienced, with Wheeler noting that she has been going back-and-forth between her NPLW season with the Uni, to the Newcastle Jets in the W-League over the summer since she was 15.

This time away from football and joining a cause like the May 50K has given her a new perspective and greater sense of gratitude for both the game and life itself.

“This break has essentially broken normality which has been good for me," she continued.

"Instead of rushing from A to B, I know the value of going out for a run because I enjoy it, I now value having the time to cook dinner for my family, I know and value the time to reconnect with loved ones.”

Despite playing football all year round, Wheeler also studies full-time at the University of Sydney.

She is expected to graduate this June with a Bachelor’s degree in commerce after completing her final semester online.

Wheeler admits that completing her units online has been an adjustment, but she is excited to finish her degree and get back onto the pitch for the Uni in the NPLW season.

She believes the next NPLW season is going to be even more competitive after last season’s success, the quarantine period and an influx of quality players from other leagues, taking the league to a whole new level in 2020...if and when coronavirus restrictions are eased.

“This NPLW season is shaping up to be the most competitive season I’ve ever been a part of," Wheeler continued.

"We have some of the Future Matilda girls re-joining the league, and then several of my Newcastle Jets teammates have joined Manly United and Northern Tigers.”

However, Wheeler is still very confident that Uni will continue to be one of the best teams in the competition thanks to their team history and chemistry that they have developed from playing together in the last few seasons, a factor other teams may struggle with.

She also believes that this time outside of football and doing the May 50k has created a great environment for on-field success.

“We’ve maintained a core hard-working group for several years, which is a considerable advantage," she said.

"It enables us to cultivate a supportive environment that encourages us to better ourselves on and off the field. We will be able to hit the ground running when the season eventually restarts.”

For more information on SUSFC efforts in the May 50K, check out their page https://www.themay50k.org/fundraisers/SUSFC

Matildas to keep up the pace in Asian Cup 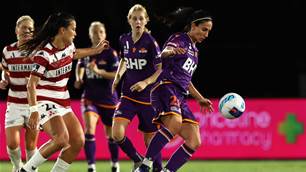