Wallaroo turned Aussie 7s stalwart Samantha Treherne has achieved her dream of being a professional athlete after signing on with Rugby Australia.

After making a name for herself in the Wallaroos, Australia's women's XV rugby side, the 25-year-old continued putting on strong performances for Queensland in the inaugural season of Super W.

She continued playing the XV-side game in Australia's 50th test match during the historic double header clash against New Zealand in August.

Treherne was plucked into the Aussie 7s squad on a short-term contract after the opening round of the University Sevens Series where she was representing Griffith University and went on to earn Aussie 7s caps in Colorado and Dubai.

Worth the wait and everything in between 😬 Capped #52 💚💛

“We’re really proud to be officially welcoming Sam into the Aussie Squad and it’s great to be including her in our long term plans moving forward," Women’s Sevens Head Coach John Manenti said.

“She’s an incredibly hard worker and relishes the contact zone in defence which will make her a great asset to our team.

“2018 was a great year for Sam and she grabbed every opportunity put in front of her with both hands.

“Myself and the management team are really looking forward to seeing her potential continue to grow in our full-time program.” 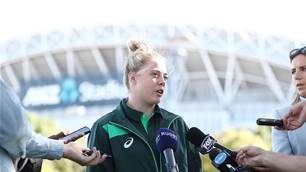