Gielnik made her Matildas debut in 2012 when she was 20 but with Australia's strong attacking prowess which featured the likes of Sam Kerr, Kyah Simon, Caitlin Foord and Lisa De Vanna, it was hard to get a foothold in the squad.

She missed out on the 2015 World Cup squad after changes to the coaching staff but a determine Gielnik wasn't going to give up.

In 2016 she found herself back in the green and gold after a superb season for her then club Brisbane Roar put her on Alen Stajcic's map for the Matildas Olympic qualifying squad.

The Matildas would go on to be undefeated in the qualification tournament while Gielnik also scored a goal.

However, it was a heartbreaking moment when Gielnik just missed out on the Rio Olympics squad.

"I think the biggest challenge by far that stood out to me the most was shyly missing out of on the Olympics, just missed out by one there," she said.

"I think that was the most devastation I've felt in my career.

"I knew that feeling and I never wanted to have it again so I think that left a big desire in my heart."

Watch the moment @EGielnik found out she made the squad for France 🇫🇷 pic.twitter.com/jgKHYx3cIl

The 27-year-old has been flourishing in the Matildas and has been a regular member of the team since missing out on that Olympic team.

However, since her return to Melbourne, there has been more confidence in her playing ability.

Gielnik played a major role in Victory lifting the Premiership in the past W-League season with her pace and eye for goal. 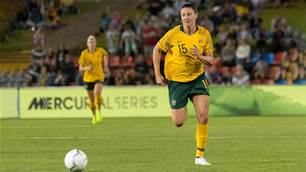