I’m quite convinced that just about the most difficult place to follow the Olympic Games on the planet is when you’re at the Games themselves.

Of course there is the peak immersion when you are lucky enough to be at an event. There’s absolutely nothing like calling out encouragement at the field (aka screaming like a fanatic) when you know the rest of your country is confined to screaming at their televisions.

It’s a funny feeling knowing that waving around a green flag with a yellow kangaroo wearing red boxing gloves is the most significant way you can represent your country in that moment.

We rise with every Australian attack on goal, we bellow ‘No fouls! No shots!’ when the opposition encroaches on goal. And we applaud great play from both teams. 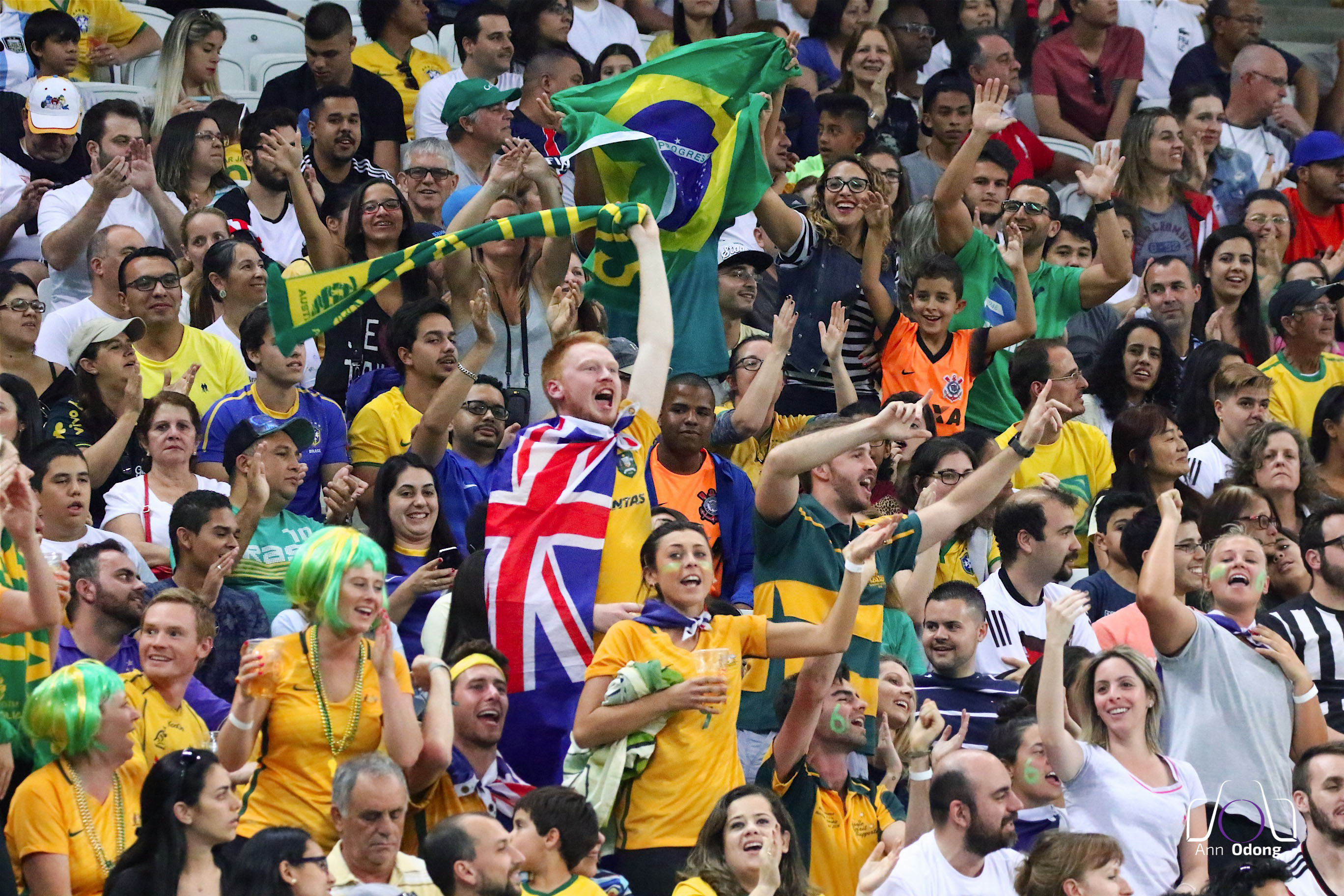 Sitting among the Brazilian crowd has been phenomenal. Their support of Zimbabwe against both Germany and Canada in Sao Paulo was nothing short of astounding, and as fans of Australia we were somewhat relieved to be taking on Zimbabwe in Salvador where the crowd didn’t have such a warm history with either team. In hindsight, that would have been a perfect preparation to the reception Australia will receive in Belo Horizonte when they play Brazil on home turf.

It’s a guaranteed sellout at the Mineirao Stadium, which means there will be over 61,846 fans in the crowd. By my calculations, approximately .1 per cent of us will be cheering for Australia. Where it counts though, on the park, it’s a 50/50 split and Australia appears to be growing in confidence and creativity in this tournament.

Only the USA in 1996 has progressed past the quarter finals as host nation. But Brazil is no ordinary host. A Selecao (the Selection) won silver in 2004 and 2008 behind the USA who have won all but one of the Olympic tournaments, falling to Norway in golden goal extra time at Sydney 2000.

The coverage here in Brazil for their women’s football team has been extraordinary. Similar to London 2012, the home women’s team have excelled in the group matches unlike their male counterparts. Moreso than any other sport, comparisons between the teams have not been glowing for the men and in a sort of back-handed compliment to the Brazilian women’s team, journalists are calling for their men’s team to be replaced by the women. More pleasing is the response local crowds have had at the matches. I’ve seen the ‘awakening’ of the US crowd in 1999, Australia in 2000, London in 2012, and now Brazil in 2016. 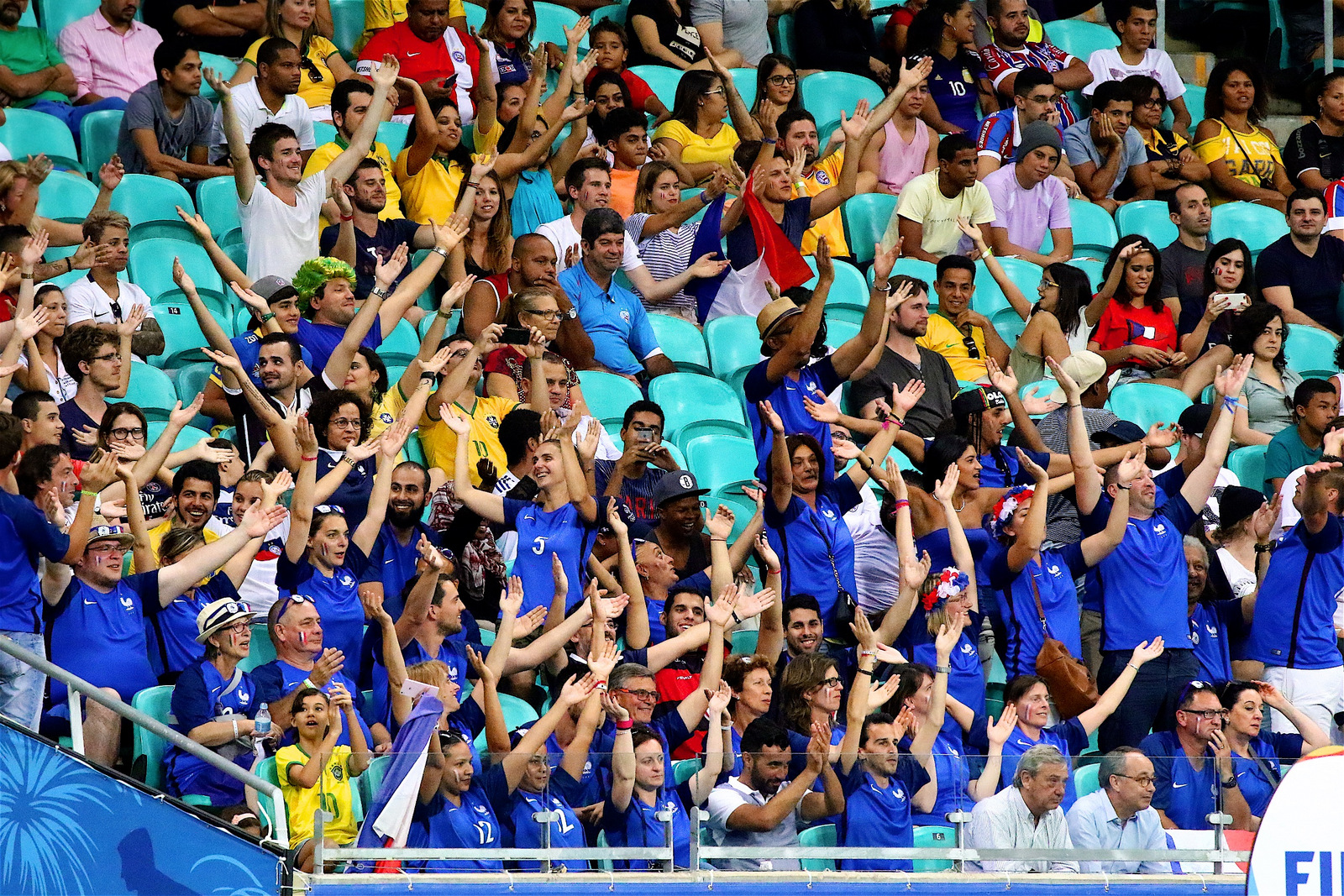 Watching the profiles of home teams and the size of their supporters grow and develop has been kind of like observing a young fruit tree mature. Through the early years, all the work is being done underground out of sight. The players are forced to break through barriers, usually even harder to penetrate than sods of soil or rocks that roots of young trees need to contend with. They show promise year after year as small blossoms come and go, and small glimmers of success emerge but are short lived.

Female football teams remain ignored largely by the mainstream media, by federations, and by the broader sporting public. And then it’s their time - they host a major tournament. The first buds grow quietly through the frosty winter, as they have every other season, then under the spotlight of the Olympic or World Cup bright lights, with the sun on their backs, the buds open in full bloom, much to the delight and surprise of the sporting public. The fruit is mature, and it never tastes better than when it is homegrown. Some progress takes longer than others. Funnily enough, this excellence was in their backyard all along, they were just busy watching the grass grow.

An Olympic Games is an event where sales, promotion and marketing are the main game, noting the ‘Olympic experience’ is almost as much the product as the content of the sport is. The International Olympic Committee appreciates the fruit on the tree – they sell its every virtue, why we all need it, how it will taste when we bite into it, and with the perfect pitch that we must buy now because it won’t last long!

In the stadiums, the sports presentation is designed to make us feel we are somewhere special – all of the logos in the stadium are covered up with Olympic look and feel, only drinks sponsoring the Games can be sold at the venues, and of course, only one major credit card can be used…

There is somewhat saturation coverage on the television, but to the frustration of visitors from other countries, the focus is on the home nation. It’s the same in every country… we will know that globalisation has truly hit when we can select coverage of a certain country to watch on tv or online rather than just the country we are in.

For example, we wanted to watch the Sweden v China women’s football match on television after we arrived back at the hotel after the Australia v Zimbabwe match. That was the crucial match that would determine which city and opponent Australia would face. Instead, the dead rubber of Brazil v South Africa was showing on three of the four Olympic channels. 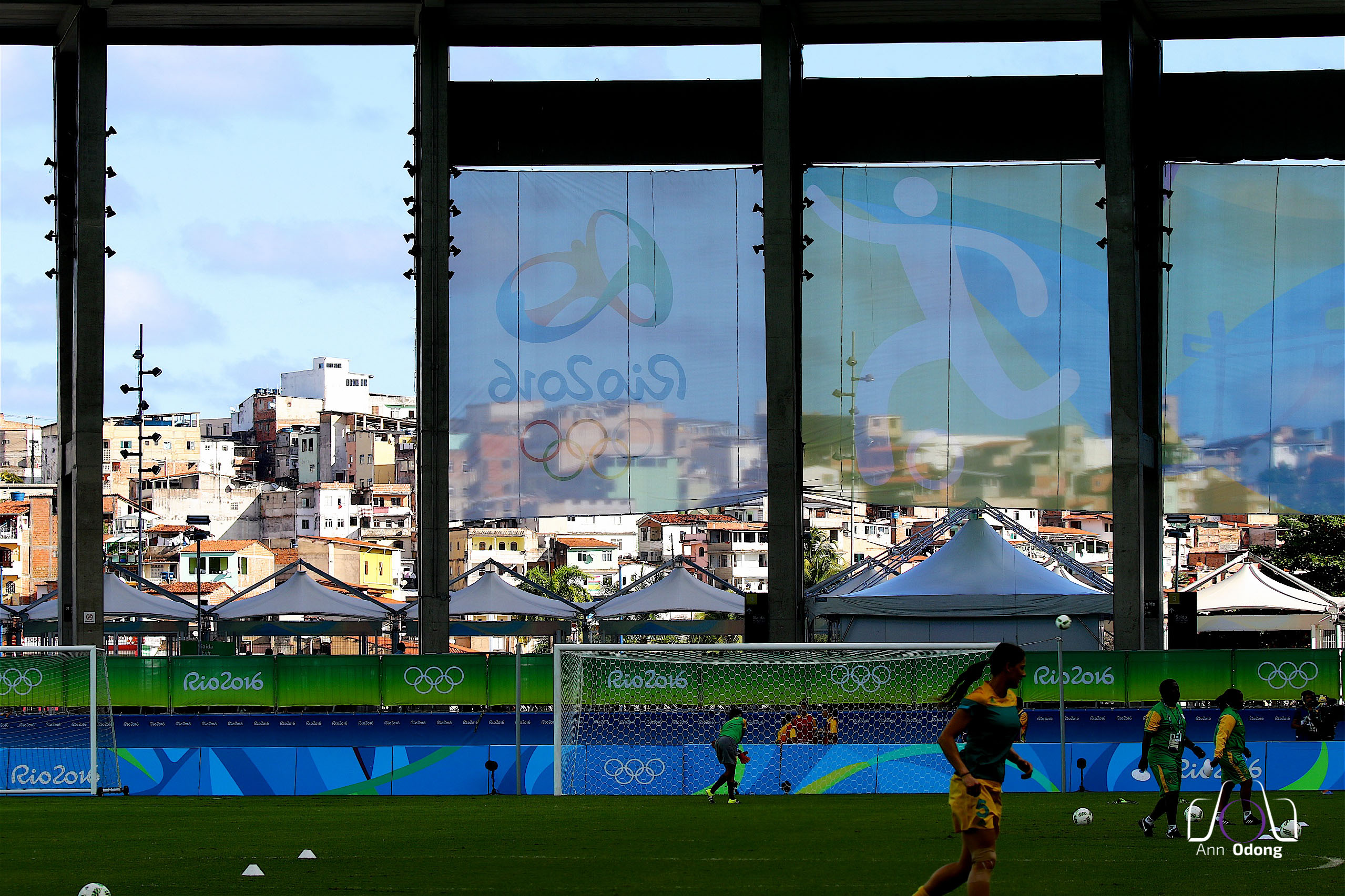 And that’s what makes following the Games so difficult. We see snippets on twitter from Australia, but the content is ‘not available in our country’. We see snippets on tv here, but we can’t understand the Portuguese language. We love seeing photos of the football across the pages of the newspapers, but again, we can’t read the critique.

Thank goodness for the Twitter, Facebook and Instagram feeds of our favourite athletes and journos. We had to read the women’s Rugby Sevens final on twitter – lucky that as women’s sports fans that’s how we consume the majority of our sport.

Speaking of which, if you happen to find yourself ‘out of country’ tomorrow, or in fact watching a youngster at junior football around the place, tune into The Women’s Game on twitter for live tweets of the action. I’ll be posting a photo or two from the stands. Wish me luck as I mingle among the 99.9 per cent!