Australian beach volleyball pairing of Mariafe Artacho de Solar and Taliqua Clancy have said they will take it one game at a time after their quarterfinals win today.

Australia is through to the semifinals of the women's beach volleyball after straight sets victory over Rwanda pairing Denyse Mutatsimpundu and Charlotte Nzayisenga.

The team have not dropped a set on their way to the semi-final.

Whether they win or lose in the semi, they will be playing for a medal but Taliqua Clancy said the goal of any athlete is to be on that podium.

"It's extremely special, all athletes come to the Commonwealth Games to stand on that podium," she said.

"Just one more job and just one game at a time, that's our team philosophy and that's the way we have to go about it.

"I know if we bring our best we will be in that final," Clancy said.

Australia will face Vanuatu in the semifinal tonight.

Vanuatu had a tough quarterfinal against England after England took the first set 25-23 with Vanuatu winning the next two sets. 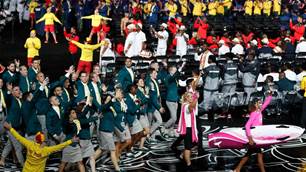