After being severely hampered by injuries in the first two legs of the Rugby Sevens World Series, players returning now have to prove they deserve to be there.

Australia's women's Sevens side will face a series of internal games on Friday as coach John Manenti prepares to select his side for their Sydney 7s title defence.

Manenti passed up the opportunity to play in a Fast Four competition in Hamilton a week out from the tournament and won’t be sending a team to the Coral Coast 7s.

"It gives us a little bit more time without travel and when we made the decision around Hamilton was many months ago," he said.

"We didn't know at that stage we would have the injuries we did and we probably wouldn't have played this internal trial normally but we've genuinely got some hard decisions to make and the best way to work out who wants it most is to pit them against each other to see how it goes."

Having relied on a number of youngsters during the Glendale and Dubai legs of the Series, Olympic gold medalist Shannon Parry and Emma Tonegato are trying to prove they are back to their best.

Parry still has a few "hula hoops" to get through to be in with a chance of selection for Sydney but she knows that it's going to come down to her performance.

"There's no doubt that John Manenti's definitely set the platform there that it's (everyone) up for selection so if you don't perform, you don't get picked,” the co-captain said.

“He's definitely set the benchmark there that if you don't perform, you're not going to get picked, so that's where it is.”

Australia will be without Charlotte Caslick who has been ruled out of the Sydney tournament after tearing a tendon in her hand in Dubai.

They head into the Sydney 7s as the reigning gold medalist, having gone through the tournament in 2018 undefeated and didn't have a single point scored against them.

However, Australia currently sits fourth in the overall standings for the current 2018/19 season having finished fifth and third respectively.

With this Series counting towards four quota spots for the 2020 Olympics, Australia will need to remain within the top four to qualify automatically.

Australia will take on Spain, China and the USA in Pool C. 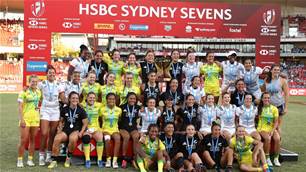