Australia has missed out claiming back-to-back Sydney 7s titles going down in the final to Trans-Tasman rivals New Zealand.

It was the first final of the 2018/19 World Rugby Sevens Series after defeating Ireland 24-12 in the semis earlier the day.

However, the Kiwi's were never truly threatened by Australia on their way to collect their third gold medal of the Series with a 32-10 win.

The result is a 180 turn around from where the side was just a year ago.

It didn't take long for New Zealand to open the scoring despite some controversy surrounding the lead-up but Australia responded with a magical try.

From there the 2018 World Cup winners put the pedal down to have a lead 17-5 at the break before Michaela Blyde ran 70m down the field to give her side.

While Sykes was able to respond with another solo effort, Stacey Waaka and Blyde ensured the trophy would be going across the ditch.

“You don’t want to be chasing the game against them too much and unfortunately, during that yellow card, they scored two tries while that happened," coach John Manenti said.

“Obviously that gave them a bit of breathing space and once you start chasing, you need everything to stick and go to hand and it just didn’t quite. There were a few bobble balls that bounced left instead of right but full credit to them, they are a good outfit and they don’t give you too many chances.

“I’m disappointed for the girls as they worked really hard and showed some good improvement over the weekend and certainly from Colorado and Dubai but we’re just going to keep working harder and keep chasing them,” Manenti said.

The win for New Zeland sees them extend their unbeaten run to 48 matches. For Australia, the silver medal sees their steady improvement continue after being hampered with injuries.

They now sit joint third on the standings with three rounds left to play in Kitakyushu, Langford and Biarritz with the top four team qualifying automatically for Tokyo 2020. 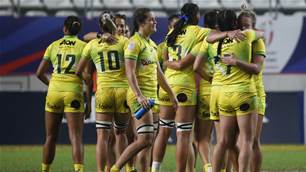