The second day of the Sydney Sevens action was hotter and drier, as teams still in contention for the tournament win fought it out in the first knockout round.

The USA followed up their strong finish on day one with a win over Russia, with only a conversion separating the sides.

Joanne Fa'avesi was happy with the win, and being able to empty the tank before a decent rest.

“Every game is important, but we specifically train to play quarter-finals. Day one you take your good and your bad but it doesn’t count if you don’t get past quarter-finals.”

Fa'avesi is looking forward to day three, and particularly the challenge that playing New Zealand brings.

“I like to think that somewhere down the line, every team is going to be a part of that good competition. We want to play the best.”

New Zealand were troubled early by Canada, but held on for a win following a few errors in wet conditions. It was an important win for the side, and Michaela Blyde was still catching her breath after a quick finish against one of their recent tough rivals.

“We knew we only had one game today so we literally had to empty the tank just for 14 minutes, we get a massive rest to get ready for tomorrow.”

Blyde is in a seesawing race for top try scorer with Canada’ Bianca Farella but isn’t focused on more than end results.

“For me personally my number one goal is for us to win the World Series for a start. Obviously, those little individual acknowledgments are humbling, but that’s just a part of my role, scoring tries on the outside.”

“It’s really good because obviously, all these other teams are coming through. A classic example is Ireland. They’re kind of one of those teams that one tournament they’ll make quarter-finals and then the next tournament they struggle. For them personally, it’s really cool to see them grow.”

Ireland surged into their first World Series semi-final after a 22-7 win over Spain as the rain was easing. Captain Lucy Mulhall was happy to be performing, and growing in self-belief after a strong first day.

“Our coach set out a really good game plan and we stuck to it. I think there was a moment, a change in the mindset that we can compete with the top teams, so (the win over Canada) was really impressive for me.”

In the last quarter-final, Australia beat France in their first meeting since the semifinal at World Cup last year - but Ellia Green said she wasn’t focused on memories of the contest.

“We don’t like to hold onto the past, that’s definitely history. We’ve tried to focus on the now moment, and that’s our theme of the tournament - living in the now moment.”

Green is thriving in the senior ranks of a side with a few regulars missing.

“I came through the ranks pretty young, and I guess it’s my time to be a senior player and I’m enjoying being the best role model I can for our junior players.”

“We just know that we play for each other. No matter who’s on the field. All the girls in rehab have contributed to all the hard work of today.”

Australia built a lead with a few solid first half tries, conceding a couple late but holding on to keep their title defence hopes alive. Australian coach John Manenti was relieved with the result.

RE:LIVE: Australia go from deep!@Aussie7s keep the ball alive to score this beautiful try from inside their own half #Sydney7s#DHLRugby pic.twitter.com/vyNRfLrNBM

“I feel relieved, very much so. France are a quality side, they’ve been playing good, they’re tough, they match up really well against us. The conditions weren’t perfect for what we wanted to do, but we’re really happy to get through. it was really important from a qualification point of view, to try and put some space between us and France.”

Challenge Trophy action started with a pasting of PNG at the hands of England, perhaps inspired by their teammates, Jess Breach and Emily Scarratt who both featured heavily overnight in Six Nations play against Ireland. England were eventual runners up to fan favourites Fiji. 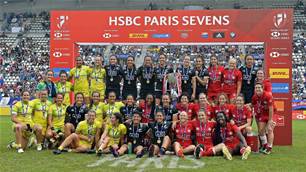