NSW Swifts' New Zealand recruit Katrina Rore doubts any information on her national coach and a long-time Silver Ferns teammate will be of much value when she makes her Super Netball debut.

Rore played at wing defence in the New Zealand team who shaded Australia less than two weeks ago in the World Cup final. She will line up on Saturday in a top-of-the-table blockbuster away to Sunshine Coast Lightning.

Lining up in the opposing midcourt will be Silver Ferns superstar Laura Langman and calling the shots from courtside will be New Zealand coach and dual Lightning Super Netball title-winning mentor Noeline Taurua.

"I think no matter what kind of intel you have on those two, it doesn't matter because they are such experienced campaigners," Rore told AAP.

"I'm already having some yarns with Laura and a bit of banter has to happen before these types of games.”

Recruited as a replacement player for injured Swifts wing defence Kate Eddy, Rore's only on-court preparation time with her new teammates before the game was a 45-minute captain's run.

Swifts, who lead second-placed Lightning by seven points with four rounds remaining, have suffered a blow with England shooter Helen Housby ruled out of Saturday's game with a thigh injury.

"Helen has played a huge amount of netball over the past month and, while the Lightning away is probably the hardest game in the competition at the moment, we have to look to the rest of the season, too," Swifts coach Briony Akle said.

The Swifts' only loss this season was by two at home to Lightning when they surrendered a nine-goal lead.

"We've grown a lot since then," Akle said.

"It's probably more of a mental space when things don't go so well in the game, so we’ve addressed that."

In other games this weekend, Vixens host Fever, the Giants take on the winless Firebirds in Canberra and the Magpies visit Adelaide to play the Thunderbirds. 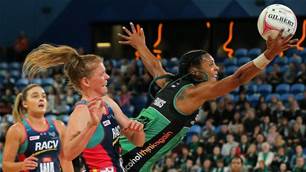 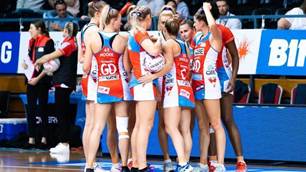