After sitting out in 2014, South Africa return for a 5th Cyprus Cup after the withdrawal of New Zealand from the 12 team field.

After sitting out in 2014, South Africa return for a 5th Cyprus Cup after the withdrawal of New Zealand from the 12 team field.

On the coaching bench with Pauw will be a face familiar to W-League fans with former Canberra United coach Liesbeth Migschelsen ruling out a return to the champions after being recently appointed as Pauw's assistant.

South Africa narrowly missed out on qualification for the 2015 FIFA Women's World Cup after finishing fourth in the 2014 African Women's Championships.

It would have been their first World Cup, although Banyana Banyana participated at London 2012, their first international football tournament.

With the announcement of South Africa, all 12 nations have been confirmed for the 2015 edition that kicks off on 4 March 2015.

Australia is in Group B alongside tournament organisers England and the Netherlands with Finland rounding out the group.

The Matildas are currently in their final camp prior to departing for Cyprus next week with the 4 internationals coming on the back taking out the recent tri-nations series in New Zealand.

The squad will be announced at the conclusion of the camp. One name that won't be there is Casey Dumont after the goalkeeper ruptured her ACL last Thursday.

While in better news for Alen Stajcic, Sam Kerr is close to returning after the forward moved to the running phase of her rehab from a medial ligament injury suffered 3 months ago.

Australia kicks off their Cyprus Cup campaign against the Netherlands on 4 March 2015. 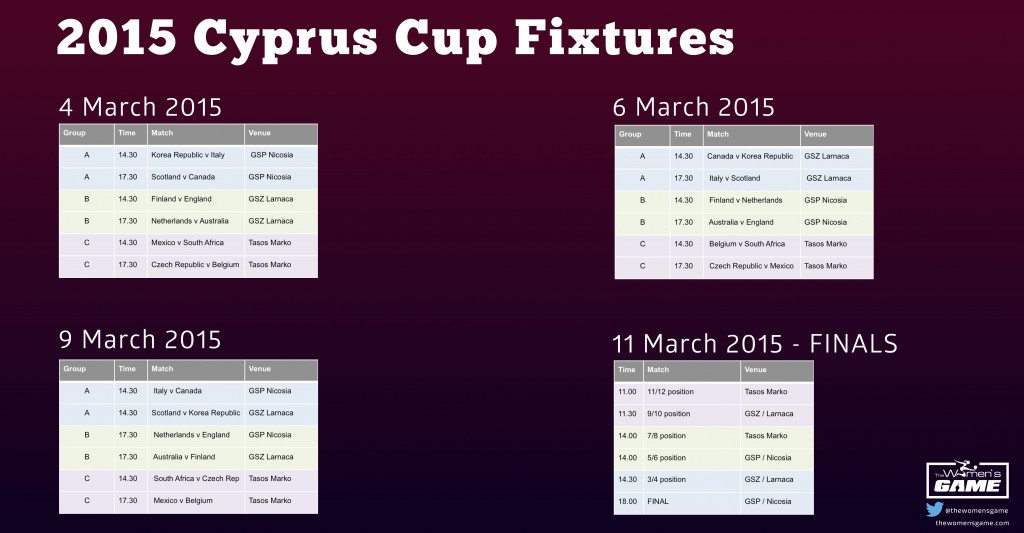