Wellington Phoenix didn't let rescheduling and ground changes get them down, registering a win over Western Sydney Wanderers in the A-League Women.

Wellington have secured just their second A-League Women win and remain in the mix to avoid the wooden spoon in the side's debut season after edging Western Sydney Wanderers 3-2.

On a sodden Sydney evening, the Phoenix deserved full points despite the Wanderers having ample opportunities late in Tuesday's clash.

Rescheduled from Sunday and then moved from CommBank Stadium to Wanderers Football Park, the Phoenix could be forgiven for failing to take flight early in the match.

The home side had no such issues, however, as midfielder Ashlie Crofts had them on the board after just two minutes.

Captain Erica Halloway's pinpoint cross from the right flank left Crofts with an easy glancing header, the Phoenix failing to mark up sufficiently on the lone target.

Despite the heavy field, the match entertained with frequent end-to-end forays, Libby Copus-Brown troubling the Phoenix with her drive through the centre of the park while the visitors were well served out wide by Ava Pritchard.

The Phoenix's industry paid off in the 37th minute, shortly after Halloway gave away a foul.

The free-kick came up short but on the subsequent play defender Isabel Gomez dinked a ball over some sleepy opposition to leave Kate Taylor one-on-one with 'keeper Sarah Willacy.

She finished off with the simplest of touches to ensure the Phoenix were level at the break.

Forward Pritchard capitalised on a premature move by Willacy in the 74th minute before crunching the ball on the diagonal to hand the Phoenix a rare lead.

Ava Pritchard catches Sarah Willacy in no man's land and @WgtnPhoenixFC go 2-1 up with ten to play.

It led to a helter-skelter finish with Halloway and Danika Matos spurning good opportunities for the Wanderers before Grace Jale's finish after a goal-line scramble appeared to put the game beyond doubt in time added on.

There was still enough time for Copus-Brown to pull one back but her effort proved the last kick of the game.

The Phoenix (seven points) are now level with the Wanderers but sit behind the Sydneysiders on goal difference in 10th.

Phoenix coach Gemma Lewis said her side was getting used to the chopping and changing of the competition and they had warmed to the task after a slow start.

"We probably conceded the goal because we were pushing for another for goal difference," she said.

"But it just shows how hungry the girls are to get off the bottom of the table."

The Phoenix play Perth on Friday while the Wanderers meet Melbourne City on Saturday to close out the regular season. 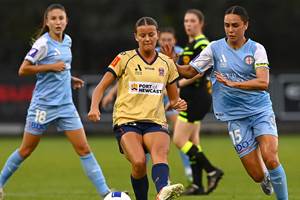 Melbourne City have moved back into second on the A-League Women table and kept the pressure on Sydney in the premiership race after beating Newcastle Jets 2-0 on Tuesday.