After a successful sporting career in gymnastics and track cycling, Livia Gluchowska started jiu-jitsu and hasn’t looked back.

Livia originally didn’t want to compete, admitting she has a tendency to get obsessed with training, but she gave it a try and found it the best way to improve her game.

“Every time I competed Jiujitsu made a bit more sense to me, the points made sense or the aim of the whole game made sense,” Livia said.

“From then it was more just about evolving, it was just a really nice way to improve,” she said.

“I never had an aim of going overseas to compete or to be really good but it gave me more of a focus to my jiu-jitsu. It probably wasn’t until second year blue belt that I actually thought about going to worlds.”

Livia started competing at international events while she was studying to become a physiotherapist.

“I was still at uni when I started so I had something like 35 contact hours a week plus I worked in engineering and I tried to train,” Livia said.

“I was probably training two or three times a week max and then during my final year, I trained three or four times a week.

“Then when I graduated and became a physio I had a full time job but the hours in physio are a little more flexible.”

It was a balancing act not only in finding time every day to train, but also to get leave off work to compete which Livia said she was quite lucky with.

“In saying that I tried to give people as much notice as possible, I planned out a whole calendar, I found my own replacements for work, and I didn’t think I was unreasonable.”

“It was hard at the start but now it’s easier because I work for myself.”

Even though Livia’s schedule is packed with teaching classes and running her own business, she said she can get a bit carried away with overtraining.

“I’m a little bit silly in terms of overtraining but I’m getting much better now,” she said.

“My strength and conditioning coach made an app where I record my training session, how many minutes I’ve done it for and my perceived exertion rate so if it hits above a certain number in a day then I know I need to have a quiet day.”

Training Brazilian jiu-jitsu twice a day for 2-3 hours a session can be tough on the body and on top of that Livia also does strength and conditioning work and wrestling training.

“I’ve got a few training sessions during the week where I’m going really hard then the others are skill specific or it's just a flow roll and transitions,” she said.

“Plus on top of that I lift twice a week and then I wrestle three times a week.”

This doesn’t leave a lot of time for recovery and considering she’s been competing in a high level in a variety of sports for 27 years, Livia has been quite lucky in minimal injury setbacks.

“I’m trying to be a bit smarter with my recovery as well because if I’m tired my training is bad and I don’t get much out of it because I can’t even concentrate,” she said.

Because she’s a physio, Livia also has a deep understanding of whether or not something is likely to cause permanent damage or if she’s just tired and sore.

“But I’ve been an elite athlete for 27 years at a pretty high level in every one of my sports and I’ve gotten away with like a broken bone.

“I don’t have an ACL but I’ve rehabbed that and the rest is just arthritic fingers and wear and tear - so I’ve actually been quite lucky.”

After hosting a recent seminar at Perth club Grappling Technics, where the majority of attendees were women, Livia said she was thrilled how the numbers of women in the sport were growing. 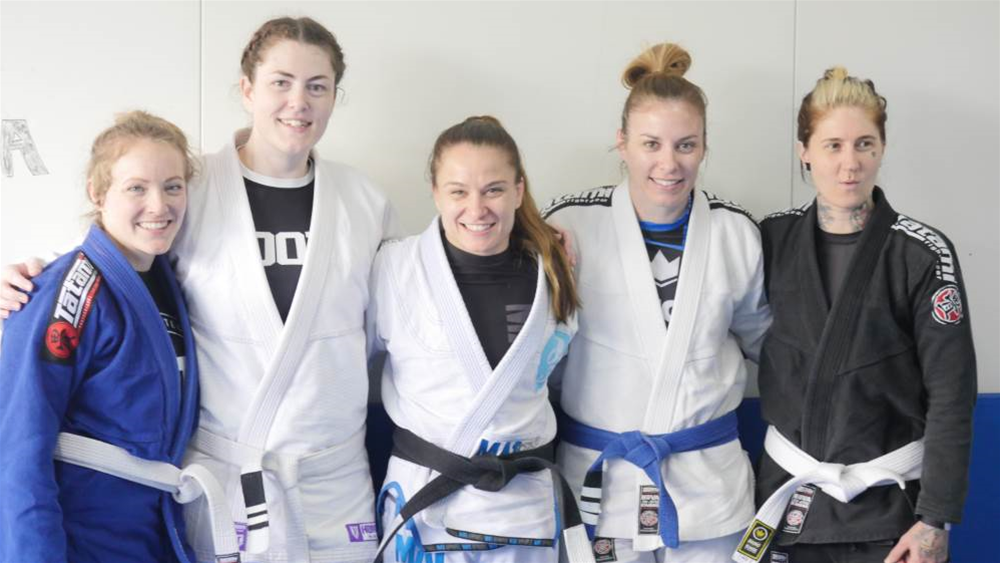 Her advice for clubs who want to encourage more girls in the sport is to create a respectful environment for women to train and to appreciate the differences in training style.

“You have to be a bit kinder to the new girls and also teach the guys how to roll with us. We move completely differently to men so what works on the smaller 60 kilo guys is very different to 50 kilo girls,” she said.

“Its actually a really hard skill to be learnt for guys to roll with girls. I will tell a guy you can put pressure on me, I can tap, but you can’t be reckless because my ribs will break.”

Livia also thinks that women in leadership roles within clubs is a great tool to get more women on the mats and can help build a friendly and welcoming environment.

“In my club I’ve got such a wonderful group of women and everyone just jumps in and adds the girls on the Facebook group or go and have a beer or try to help them because they’re my training partners in the future,” she said.

“The purple belts I have now were white belts not that long ago and now they’re giving me a really hard time at training!

“They’re my toughest training partners and probably in two years’ time they’ll be beating me and that’s what I’ve always wanted.”