However, despite the strides being made towards equality, there is still a long way to go until the women’s game is on an equal footing with the men’s.

This lack of equality can present barriers to participation or even drive some players from the game. Some of the main obstacles facing female footballers are funding and facility access, professional encouragement, comparison and ‘the comment section’.

Some associations allocate game times based on age and grade, starting with the younger age groups and lower grades and working their way up. However male teams are often prioritised for later kick-off times, implying that no matter how high the grading awarded to a female team, they are always less than that of a male team.

Other smaller factors contribute to women feeling less welcome in a footballing space.

The provision of jerseys and equipment in only male sizes, a lack of female-specific facilities such as change rooms and relegation to secondary grounds are just some examples.

The pay gap for professional footballers means that only a very select few female footballers are able to dedicate themselves completely to their profession.

The average W-League salary sits at $17,400 meaning many players need to supplement their income with another job.

With only limited opportunities to earn a sustainable income, football is not often regarded as a career option for women, meaning many girls aren’t encouraged to invest the time needed to pursue it as a profession.

Comparison to the men’s game

The women’s game is constantly in the shadow of the men’s, an idea that is reinforced in subtle and often accidental ways.

Simple statements such as describing players as the female equivalent of a well-known male player doesn’t allow their achievements to stand on their own, instead they have to be justified by those of a man’s.

These comparisons start young, many players being congratulated on being ‘good for a girl’ instead of just being told they are a good footballer.

Comments like these reinforce the idea that women’s football is somehow lesser, the player is not a good footballer but only seems to be good because of their gender. Even professionals aren’t exempt: most clubs use the ‘first team’ to describe their men’s side, resulting in the implication that their women’s side is only secondary.

While comparison may not always be a bad thing, highlighting areas that can be improved on to further the development of the game is more often taking away from the women’s game, and making it more difficult for females to be taken seriously.

The internet can be a terrible place for athletes as fans and critics have equal opportunity to let their feelings be known.

Footballers of either gender face online abuse, however women are targeted on average three times more than men.

Advocacy group, Plan International found that in Australia 23% of negative comments targeted at sportswomen were sexist and 20% demeaned their abilities.

Former English defender Alex Scott opened up about her struggle with social media receiving sexist abuse close to every single day since taking on a football pundit role at the BBC.

This has a trickle-down effect, showing young girls they may be subject to similar abuse for daring to pursue a sporting career.

Most of these factors are unintentional but are having a devastating effect on the women’s game. By addressing these obstacles hopefully more young girls will feel more comfortable in the footballing space and not face the same challenges of the generations before them. 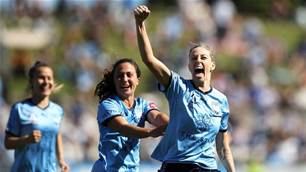