The NSW Women’s team remain undefeated after round three of the Super W competition after beating ACT Brumbies women 24-5 yesterday.

Chloe Leaupepe directed play well and she contributed a personal tally of 19 points in her team’s victory.

ACT put in a gritty performance to thwart NSW from truly running away with the game.

Despite this, NSW coach Rob Baumann was happy where his side is at with one competition match to go against the Melbourne Rebels.

“We’ve got a great worth ethic, all the girls have come together really well... they just get out there and play for each other and get the job done,” Baumann said.

Baumann’s been fortunate in the squad he has been able to assemble for this competition, with the bulk of his players being chosen from past national championship winning Sydney representative teams.

His inaugural 2018 NSW Super W squad has been selected around these players, who also make up the three powerhouses of Sydney’s club rugby scene and yesterday nine Warringah Rattettes provided a proud moment for their club; representing NSW on their home turf yesterday for the first time.

The Parramatta Two Blues with six and Sydney University also provided five members to the matchday squad - with a sixth in regular captain Ashleigh Hewson being unable to play due to a shoulder injury.

The players are all familiar with each other, having played in past representative teams, creating the camaraderie Baumann spoke about.

Also contributing to the team’s success is the support staff the Waratahs and NSW Rugby has assembled from the technical coaches through to the strength and conditioning trainers, who aid the team’s on-field performance.

“We’ve got some great coaches around us right through the programme and obviously the Waratahs staff have been contributing as well, so it’s certainly a team effort," Baumann said.

“Our scrum was very solid, our lineout was a bit off, but you have good days and have bad days I guess, but there’s always work to do with set-piece”, he said.

Baumann also alluded to the NSW women’s team being a humble team despite their being competition leaders.

“We show everyone respect who we play and we’ll certainly do the same against the Rebels in a few weeks," he said.

“We’ve got the week off, so it’s a good week to have the bye, so we can freshen up a bit and have a good Easter."

Leaupepe had the final word in respect and why this team is going places when asked about her personal points tally being a proud moment.

“Our fullback, our captain Ash, she’s our number one kicker, she gave me some confidence before the game, she said - just put your head down, be confident when you kick”, she said.

It indicates there is no swagger among this team and they are content to keep working hard.

All going well, NSW should be too strong for the Rebels and whoever they would meet in the final, then one thing is for sure NSW will be well prepared to give it their all. 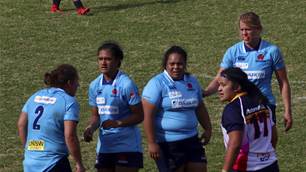