She knows it's going to be a tight race to the finish but Perth Glory captain Natasha Rigby firmly believes her team can reach this season's A-League Women's finals.

Glory, who have been on the road for most of the season due to COVID-19 border restrictions in their home state, defeated Adelaide 1-0 on Thursday to move level on points with the third-placed Reds and fourth-placed Melbourne Victory.

The gutsy 1-0 win over in-form Adelaide was achieved despite the second-half dismissal of Susan Phonsongkham which forced the visitors to hold on for over half an hour to secure the precious win.

Next up is a clash with second-placed Melbourne City at home-away-from-home Gosford in NSW on Sunday, the second part of a gruelling run of fixtures in which they meet all of the league's top four teams.

Despite the challenge ahead, mentioning finals is certainly not taboo within the Glory camp.

"We've worked it out, had a good close look at the ladder and it's going to be a fight between us, Victory and Adelaide between who makes finals," Rigby said.

"Us, Adelaide and Victory are all sitting on the same points, so it'll depend on how we go in the next couple of games.

"They are really, really important games and then, yeah, fingers crossed, we can do everything we possibly can to secure a spot."

Phonsongkham's red card means she'll be suspended for the City game but Glory will welcome back experienced ex-Matilda Leena Khamis who missed the Adelaide game.

Backing up so quickly after Thursday's match will be a challenge but Rigby says the morale boost from that result will overcome any fatigue.

City meanwhile head to Gosford aiming to keep up pressure on league leaders Sydney FC in the race for the Premiers Plate.

Sunday's game will be the final appearance for New Zealand duo Rebekah Stott and Golden Boot leader Hannah Wilkinson before they depart for the Football Ferns' She Believes Cup campaign in the United States. 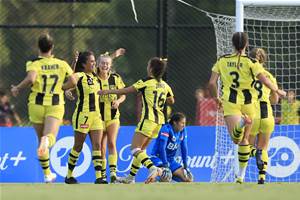