Wellington Phoenix have secured their first-ever win in the A-League Women's competition in style, knocking off Canberra United 3-0 in Canberra.

In their 11th outing in the league, goals from Chloe Knott and Grace Jale along with an own goal provided an emotional breakthrough for the Phoenix on Friday night, having avoided defeat just once before the victory.

While the fulltime whistle brought jubilant scenes for the Phoenix and a small selection of away fans at Viking Park, it provided more pain for United, now the only team in the ALW not to taste victory this season.

But the story was the Phoenix, who took over the contest once they grabbed the lead on 41 minutes.

Having struggled to make chances until that point, Knott capitalised on her teammates' tenacity and struck from just inside the penalty box, getting enough power behind the shot to ensure United keeper Chloe Lincoln - on A-League starting debut - could not keep it out.

Chloe Knott's strike has too much power on it, as the Nix head to the break in front!

Phoenix captain and goalkeeper Lily Alfeld produced a sharp save to deny Ash Sykes' swivelling effort shortly after half-time and it allowed the Phoenix to double the advantage, with Jale sprinting away and tucking the ball past Lincoln at the fair post.

The game was effectively put to bed on 62 minutes as a perfect cross from Talitha Kramer struck Ava Pritchard and took a deflection off Ally Haran, sneaking past Lincoln for an own goal.

Wellington is the place to be tonight... so is Viking Park 😍@WgtnPhoenixFC
go three clear via Ally Haran's own goal.

A relieved Jale said her side had earned their shining moment.

"Finally - finally we got the win," she said.

Frustrated United had found few notable chances but should have got on the scoreboard in the 75th minute when Allira Toby jabbed an effort wide from point-blank range, while a long-range curling effort from Grace Maher a minute later beat Alfeld but struck the crossbar.

Earlier, Sykes tucked one home on nine minutes but was flagged for a clear offside, while Michelle Heyman found space down the left wing 10 minutes later but fired her shot into the side of the net.

While the maiden win brought the Phoenix level on points with United, they remain stuck to the bottom of the table via goal difference.

But with one win under their belts, Jale said there would not be time for much celebrating as they push for further success.

"We're not just happy with one - every last game we're gonna work hard for it," she said.

We're athletes, we'll be in bed early. No celebrations - next game." 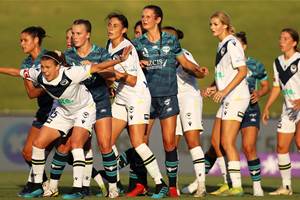