“It hasn’t been easy for them and they deserve all the rewards that were given to them tonight. The circumstances that we won the game in and getting the three points was a massive confidence booster for them, they never stopped believing.

After shipping eight goals over two friendlies, then losing their first World Cup match in a massive upset against Italy and dealing with a resulting barrage of criticism, skipper Sam Kerr summed up her emotions in raw fashion.

"There were a lot of critics talking about us, but we're back, so suck on that one!" she laughed.

"We don't listen to the haters, I love these girls, they're something else." 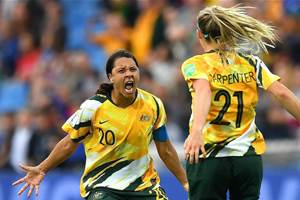 When Milicic was asked how it felt to effectively come back from the brink.

“We don’t lose our belief – if a team lost its belief, it doesn’t come back from a game like that. These girls believe in each other, first and foremost, and they understand this opportunity. They believe in the playing style and in the work that we’ve done.”

When asked if he thought the Matildas first win of their World Cup campaign would put the negative noise to bed, Milicic said dealing with negativity is all part and parcel of the passion of Australian football – but the focus always remains internal.

“I don’t think it will ever go to bed, because that’s just Australian football these days. The important thing is, that we as staff give these girls every opportunity to be successful at this tournament and the outside noise, stays out.

“We really have to focus on our job because opportunities at a World Cup don’t come around often enough and these girls fully understand that this is their time now. They want to make the most of it and as a staff, a football nation and a football community we need to give these girls every opportunity to succeed and hopefully, this win brings the country together.

Milicic has got it right, for the Matildas, their time is now - and for the Australian public, it’s time to look towards the future.

The Matildas are set to have a training session near Grenoble this afternoon.