The response from the Matildas skipper came after Australia came from two goals down to beat Brazil 3-2 in Montpellier this morning.

Kerr roared on full-time, embraced her teammates after a titanic struggle, and then let loose with her emotions when interviewed pitch side. 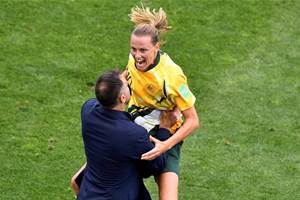 "There was a lot of critics talking about us but we're back so suck on that one," she said. "We don't listen to the haters.

"Look at that performance to come back from the deep. I love these girls, they're something else."

The Matildas have always been powered by an us-against-the-world mentality.

Back in the 80s and 90s they paid for their own flights, washed their own training gear and played without anyone watching.

In the last two decades, as they improved their world standings, they have fought for fair conditions and pay. 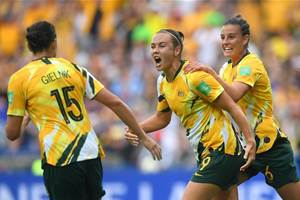 And last week intense criticism of the side bubbled over after their 2-1 loss to Italy.

"We haven't been reading (the criticism) but at the end of the day you can feel it," she said.

"Social media gives people a platform to say whatever they want, so it was good to kind of send a message back home and send a message to the rest of the world.

"We knew this would happen.

"We knew people would be quick to judge but that's football and look what we did today. We had three different goalscorers and outplayed them most of the time. 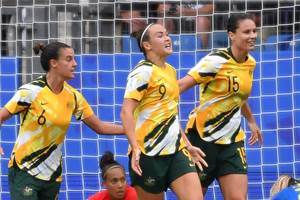 "Coming back from two goals down with the pressure we had on us, it's pretty special."

The Matildas sent a message to their detractors, but did they send one to the rest of the tournament as well?

"Hell yeah," Kerr continued. "Well, we've got to focus on Jamaica first, we're not gonna get too far ahead of ourselves.

"Brazil's one of the best teams in the world, they've got the best player probably ever in the history of the game (in Marta).

"So if people don't keep watching the Aussies, we'll come get ya like we did then. 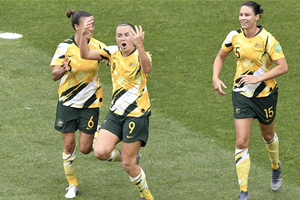 "One game was not gonna derail our World Cup hopes - and that's why it was so frustrating for us because instead of the media being 'we can turn this around', it turned negative on us and it only fuelled us, so thank you."