Newcastle Jets have finished their roster with a bang, signing 22-year-old goalkeeper Nicole Simonsen to battle Claire Coelho for the number one spot.

Simonsen's success has been at NPLW level, where she appeared in every match for Manly United last season to put herself firmly in the frame for a W-League promotion.

She and her new team rival Coelho have massive boots to fill in the departure of Britt Eckerstrom, the American loanee who helped stop the bleeding at times during Newcastle's previous campaign.

“I’ve been training with the side since pre-season started and I’m delighted to have been given an opportunity here in Newcastle,” Simonsen said.

“The quality is high and I’m enjoying the challenge of fighting for that number one jersey."

Eckerstrom has since gone on to huge success in the NWSL with Portland Thorns, a pathway to stardom the two shot-stoppers will be hoping they can emulate for Newcastle this season.

"Training with Claire and [goalkeeping coach Andrew] Goldy has been great so far," she said.

“It’s a really tight-knit bunch of girls, everyone gets along really well and I’m really pleased to be a part of it for this season.” 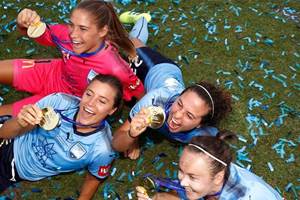