The Hockeyroos will play world number one, the Netherlands, in the semi-finals of the World Cup.

It will be no easy feat for Australia though as they have not defeated the reigning world champions in 14 games, dating back to February 2012.

The fixture will be a repeat of the 2014 World Cup final, which saw the Dutch claim a 2-0 victory, the same scoreline of the two sides recent match-up at the International Festival of Hockey in Melbourne in November.

The young team has grown since then, particularly evolving after finishing with the silver medal at the 2018 Commonwealth Games.

“To be able to execute the game plan against Argentina to keep them goalless and then execute in the pressure moments is great.

“We came in with the belief we could get the result. I’m proud that we did step up and get that final result,” she said.

The Hockeyroos take on the Netherlands at 1:30am AEST on Sunday live on Fox Sports, with the winner to play either Ireland (16th) or Spain (11th) in the decider. 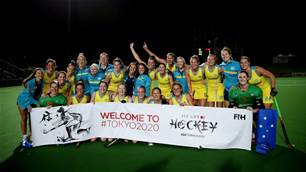 FITNESS: All about fatigue resistance