NSW women's rugby representative Grace Hamilton, who hails from regional NSW, says she's excited to be playing for her state again in the second instalment of the Super W competition in 2019.

It's something Hamilton thought she'd never do growing up, but she's excited to be standing at today's season launch in Sydney representing the NSW women's team.

The Wallaroos loose forward said, "Being born and bred like country NSW I've always been a little girl growing up supporting the Waratahs, so to be standing here, standing side-by-side to those boys I looked up to growing up it's an amazing opportunity."

She knows all the other Super W franchises will be gunning for and aiming to take NSW's  Super W crown off them, but she hopes the team can go "back-to-back" in 2019.

"There's always targets on our back and especially some of the players in our team, so for us, it's about building that as a collective and as a team.

"We want to go back-to-back, so hopefully we can do it".

On comparing the profile of the second instalment of the Super W in 2019 to last year's competition, she said more exposure this year will pay dividends in the long run.

"It's so nice to see the support, because the more support we get: the more exposure we're going to get around the country to get more girls involved and for girls to look up to every single girl running on that field."

She's also happy there are now opportunities for young girls to play rugby in regional NSW and the opportunities and pathways it creates for country girls to succeed at the top level will only strengthen women's rugby in NSW.

Hamilton's advice to young girls trying their hands at different sports in the bush is to consider rugby union as their sport of choice as adults.

"The friendships you make and the environment you're in are just so important to the game and that's what makes you love it," she said. 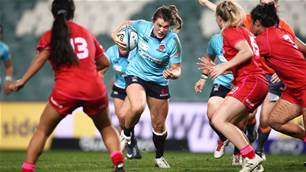 Hamilton: Super W is going to be tougher