Chloe Esposito has once again made history becoming the first ever Australian to win a gold medal at the Modern Pentathlete World Cup.

The 26-year-old made her way into Australia's heart after she won gold in a history making moment at the 2016 Rio Olympics.

It was the third World Cup event of the season and she entered the Laser-Run phase in seventh with a 39 second deficit behind the leader, Kim Sun-woo from South Korea.

Kim was holding onto the lead until the final lap when Esposito and Anastasiya Prokopenko of Belarus hunted her down.

Esposito passed Prokopenko and Kim to take the victory by four seconds.

We did it!!! From having a terrible start to 2018, questioning myself whether I was really doing the right thing... I can say YES and YES 100 times over. Pushing through those dark days to get moments like this is why we continue to do it... when they say you come out stronger you really do come out stronger! Couldn't have done it without my amazing team. First Australian ever to win gold at a World Cup. What better place to do it than at my home away from home! #worldcup3

“Although not as prestigious as the Olympics, World Cups can arguably be just as tough,” Esposito told Australian Olympic Committee media.

“Different nations can enter up to four of their best athletes so you can often get a really strong field.

“When I consider the field for this final had the London Olympic champion and two World Champions I am very proud of what I achieved," she said.

Esposito next big event is the fourth World Cup in Bulgaria at the end of May. 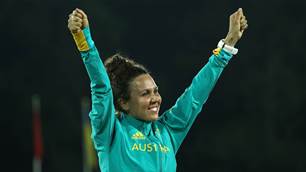 Esposito: 'I will be back'