A clear standout in the 2020 NAB AFLW draft as pick No. 2 Lucy McEvoy joins the ‘Baggers’ for her debut season in the AFLW.

Already tipped to play a crucial role within the Carlton squad, McEvoy is also hot favorite to take out the 2020 NAB AFLW Rising Star award.

McEvoy has been an AFLW All-Australian for the past 3 seasons dominating the field completely with her incredible skill, versatility and leadership on the field,

“The One to Watch”- Breann Moody

22 year old Breann Moody will be Carlton’s one to watch this year as her she brings control, passion and hard-work amongst other attributes to the team.

Playing a crucial role in Carlton's ruck since debuting for in 2017, she has become one of Carlton’s most consistent and hardworking players on and off the field.

Joint 2018 Best and Fairest Winner, Breann covers an incredible amount of ground in the ruck her role will be pivotal and influential in the 2020 season.

Off the bat of an Australian Middle Weight Boxing title, Harris returns to the Carlton bringing elite athleticism, professionalism and skill to the team.

Since slamming media trolls with trademark kick Harris has positively impacted the AFLW and has become a role model within the community.

Harris will yet again play a critical role in Carlton’s attack for the 2020 season and her experience in high-pressure situations and level head will prove vital for the club.

Awarded 2019 “AFLW Mark of the Year” and Carlton’s lead goal scorer all eyes will be on Harris as she is set to make a statement in the 2020 season. 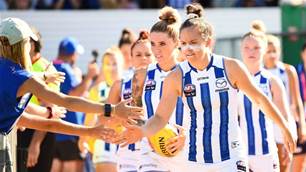 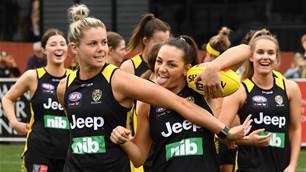