The 18-year-old works for the club and is a Gold Coast Academy graduate. Groves-Little was the Lions 56th pick at the 2018 AFLW Draft and made her debut in Round 2 against Fremantle.

"It's very good to be back and everything is in the one place, it makes it ten times better."

It was a tough decision to leave the Lions and it took her a couple of weeks to make the decision.

"Me and my parents spoke for like two weeks but finally made it and thought this would be the best place for me," Little Groves said. 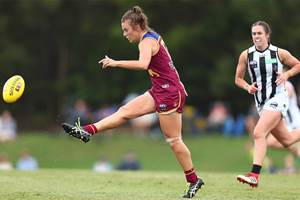 Coolangatta junior Jamie Stanton has returned to her home for the 2020 AFLW season.

There has been some positive news out of Collingwood on Tuesday afternoon with the club retaining seven key players.

“Strategically piecing together a squad and enabling the players to grow together is so important. So we are thrilled to have retained some of our best young and experienced players for the 2020 season,” Collingwood GM of Women’s Sport, Jane Woodlands-Thompson said.

“We have deliberately invested in the draft in recent seasons so to keep our best young players is fundamental to that strategy. It’s pleasing to know that the likes of Sarah, Britt, Ruby and Eliza can see what the club is doing and want to share in it.”

However, Darcy Guttridge and Iilish Ross will depart the club but it is unknown where they will go. 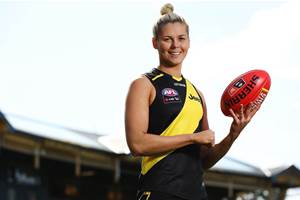 New AFLW outfit Richmond has secured the services of Katie Brennan for the next two seasons.

St Kilda also made their first move of the Trade and Sign Period announcing the return of Ali Drennan.

When the club fielded a team in the 2018 VFL Women’s competition, Drennan was a joint recipient of the inaugural Southern Saints’ best and fairest award, as well as being selected in the VFL Women’s Team of the Year.

These efforts were rewarded with a spot on North Melbourne’s list for their first season in the AFLW competition.

Drennan joins young guns Ali Brown, Isabella Shannon and Molly McDonald who have been pre-listed under the AFL’s rules.

“The Saints always held a close part of my heart,” Drennan said.

“It was always in the back of my mind how much I loved it, but I was happy to give North a go and I had a great experience there as well, but happy to be home.

“I think I really got a feel for it [AFLW] later in the season. At the start, I was a bit deer in the headlights … towards the end of the season I feel like I got the hang of it.

“I learned heaps at North which was fantastic, we had great coaches there, but I really get along with Pete [Searle] well. She’s got such a passion for the game.”

The AFLW Trade and Sign Period continues until April 18.