The 22-year-old spoke to The Women's Game in March after a lack of support left her chances of racing this year up in the air.

But not being one to give up, Angelo was determined to have her chance and continue to make her dreams come true.

On Monday it was announced that Angelo secured a deal with Kelly Racing to contest the inaugural TCR Australia Series where she will drive a #37 Astra.

Angelo is one of a four-car strong Kelly Racing TCR but is also the third female driver in the Series for 2019 alongside Molly Taylor and Alexandra Whitley.

"It's so exciting," Angelo told The Women's Game.

"Honestly, it's mindblowing because we were coming into a couple of weeks out before the first race and we were like 'nope, no way, this isn't going to happen' then it ended up happening at 5:30-6pm last Friday.

"We were like 'Oh my god, this is actually happening'." 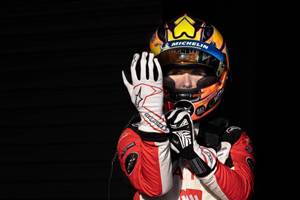 Angelo is one of Australia's most experienced female racers, having cut her teeth through the ranks in Formula Ford, Super2 Supercars and Porsche racing.

However, Angelo found out the exciting news a bit later than expected.

She received five calls from her manager while at work but she was unable to call back until her shift ended so when she called back she didn't know what was about to happen.

BOOM 💥 Proud to announce I will be competing in the TCR Series with @kellyracingtcr and I couldn't be anymore excited!!! Holy moly... I can't believe myself and @pushtalentmgt have pulled off yet another season. We have gone through hell and back to secure a drive this year. But guess what, WE DID IT 👊🏼 Sydney here we come 😃 Be sure to check out my latest blog about this weekend. Link in bio ➡️ #NeverGiveUp #TCR #KellyRacing

There had been so much organisation and behind the scenes work going on that they forgot to tell Angelo about the exciting news.

"It was a good surprise," she laughed.

However, the Melbourne-native hasn't got long to prepare with the first round of the TCR Australia Series starting at the Sydney Motorsport Park this weekend.

While those from the outside might see this as a challenge, it hasn't been one for Angelo who has done the best to prepare herself if the chance to race popped up.

"It's been good because I've had this little thing in the back of my mind knowing I'm going to be the best prepped I can," she said.

"I'm going into this weekend having no expectations, a clear mindset and no overthink things too much."

Every round to be broadcast live, free and HD broadcast coverage on SBS. Saturday’s race (May 18) will be shown from 2-3pm, while Sunday’s two races (May 19) will have a two hour broadcast from 1-3pm.