Cross code women athletes is nothing new, but Cat Phillips stretches the boundaries.

To associate the semi-oppressive late-January heat of Melbourne – the eyebrow-singing, throat-tightening kind – with the atypically mizzle-drenched sport of Australian rules football is becoming increasingly ludicrous on this stiflingly hot afternoon.

The menial task of meandering up Collins Street – a walk I, as a lover of Melbourne and most about it, will take over a tram ride – has become a painful chore. I find myself wistful of a 9-degree July morning, with footballers disturbing the frost-borne grass with muddy boots.

In but a few days, the AFLW season will begin amid the summer heat, with two new teams and a myriad of new athletes taking part in the fledgling competition’s third season.

The women’s league that has inspired observable change in women’s football in Australia, with an unprecedented number of girls and women taking up what was once a male-dominated sport.

I am walking up Collins to meet a driver of this change – Melbourne utility Cat Phillips. Once selected as a rookie in the AFLW, Phillips has played all but one of Melbourne’s games in the first two years of the league.

Like a number of her AFLW counterparts, Phillips forged her sporting career elsewhere before the league inception in 2017. Unlike most of the competition’s dual-sport players, Phillips plays Ultimate Frisbee, the relatively obscure yet obscenely entertaining sport picked up by Phillips as a teenager. The impact of the sport on her life was immediate. 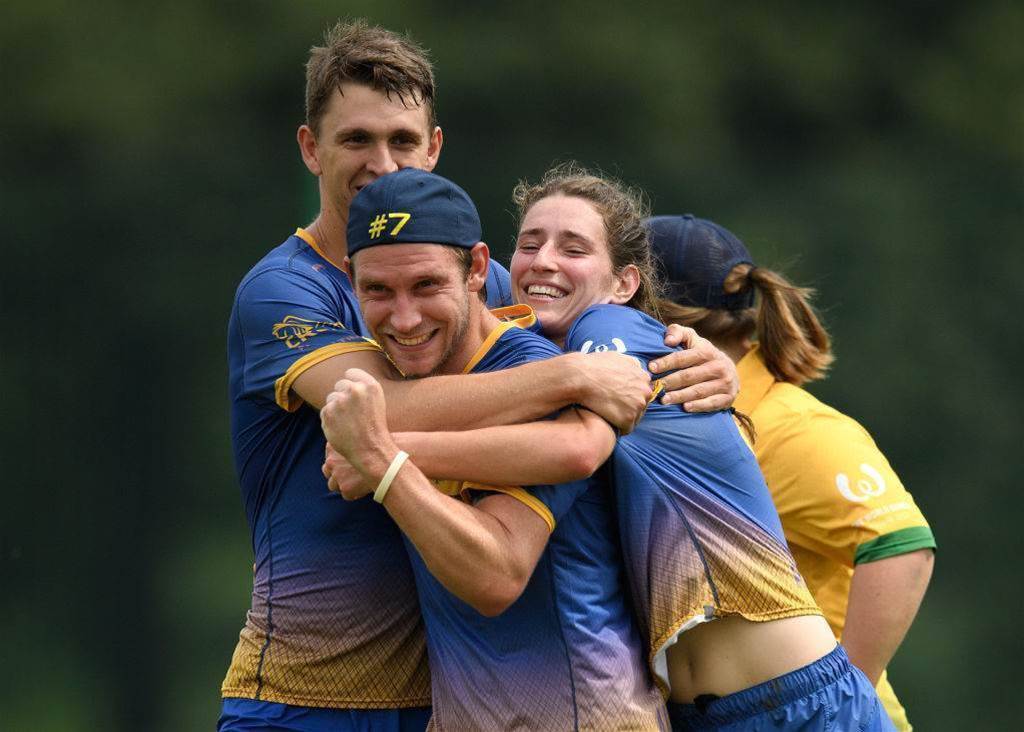 WROCLAW, POLAND - JULY 21: Brendan Ashcroft (C) of Australia celebrates with his team-mates Rob Andrews (L) of Australia and Cat Phillips (R) of Australia after winning the Ultimate Mixed Flying Disc Qualification match between Australia and Japan of The World Games at Marsowe Fields on July 21, 2017 in Wroclaw, Poland. (Photo by Matthias Hangst/Bongarts/Getty Images)

“Within about eight months of playing I went over to Canada for the World Championships – that was unreal…from that point I wanted to play in the Australian Open team and keep levelling up from there,” Phillips said.

Her career in Ultimate continued to spiral upward – Phillips is the President of Ultimate club Melbourne Ellipsis, who have dominated competitions both nationally and internationally since she founded the club in 2015.

“We headed over (in 2015) and won the US Open, which hadn’t been done before. We’re actually heading back over there this year to try and get the double.”

The victory in the US Open was the first by a non-American team in the competition. Phillips has also played at national level, while recently playing for the Melbourne Flames in the inaugural season of the Australian Ultimate League (AUL) – as well as working to run the league.

The AUL sees six players on the field – three women, three men – instead of the usual seven – and in 2018, Phillips’ Flames took out the championship, defeating the Sydney Suns 15-12.

“There’s only one pro Ultimate league in the world – it’s in America and only for men. There had been a fair bit of talk from the Ultimate community around why the AUDL (American Ultimate Disc League) wasn’t supporting gender equity, given that Ultimate is all about the values and people that play.

"They didn’t really do enough to improve, so two of my friends came to me and said, ‘why don’t we make a mixed league here?’ Next minute we’re running a whole league.”

For her work in the administration and creation of the AUL, Phillips was nominated for the Victorian Young Volunteer of the Year Award by VicSport – to be announced on the 20th of February.

“I think normally in Ultimate we find it hard to get recognition for mainstream things…it’s great to be involved in the nomination.”

A winter playing Ultimate has proved to be a helpful preparation for the upcoming AFLW season. With Daisy Pearce pregnant with twins, Phillips’ Dees will face the challenge of making up for their star midfielder in a league on a rapid improve.

“We’ve had a lot of turnover in the team…in that turnover we’ve brought on board a whole new group of people who are very aggressive and very dynamic.

"Over the last couple of years, we’ve developed a style that we’ve really been building on. With Daisy and (new Geelong captain Mel) Hickey stepping out of the midfield, we’ve had a number of people stepping up and grabbing hold of the opportunity.”

An illustrious career in Ultimate has a direct correlation to one in AFLW, explains Phillips.

“In footy you run a lot more volume – up to 10, 12 kilometres – which was something I had to learn. In Ultimate, you do a lot more powerful short, sharp running.”

It is this running ability that has seen Phillips thrive for the Demons. Early in her footballing career, Phillips has become a staple for Melbourne on a wing, utilising her immense running power to break lines.

“I love playing on the wing but I’m pretty happy doing anything.”

On Sunday at Casey Fields, Cat Phillips will find her place on, presumably, a wing, in the historic red and blue yolk of the Melbourne Football Club, representing history past and history to come. Her work in Ultimate in the last year has made it possible for women and girls to play the sport in a professional league in Australia for the first time.

This work will continue in the hot early months of 2019, where Phillips and her teammates clash with footballers nation-wide in front of rapt audiences. The AFLW is re-writing the perception of women’s sport in this country – and it is people like Cat Phillips who we will thank, now and in years to come, for their invaluable contributions.