Having lost a number of their key players after 2019, this season was always going to be a tough one for the Dogs. All is not lost though, as their fans look towards a season that should see promising young players rise to the challenge with more experience under their belts.

This season was never about this season for the Bulldogs. Following a sucker-punch trade period in which his team lost Katie Brennan, Monqiue Conti (both Richmond), Libby Birch (Melbourne) and Tiarna Ernst (Gold Coast), coach Nathan Burke turned to his first draft ready to scoop the best up-and-coming talent.

The Dogs landed Gabby Newton, Nell Morris-Dalton, Gemma Lagioia and Elisabeth Georgostathis within the top 10 and embarked on a season that was all about building experience for 2021. Although the daughters of the west managed no wins after Round 1’s triumph over St Kilda, the bones of the future were steadily knitted.

Newton, Lagioia and Georgostathis played all six matches (the former received a Rising Star nomination in Round 4) and although Morris-Dalton mysteriously did not see any action until Round 6, she slotted in as an aggressive lead-up forward against ladder-leaders Fremantle.

Newly-appointed captain Ellie Blackburn once again led from the front with 17 touches and five clearances a game and Kirsty Lamb provided muscle alongside her in the midfield.

The bonus was an injury-uninterrupted season at long last for Isabel Huntington, who averaged 11 touches and four marks a game playing predominantly as an intercept defender.

The Bulldogs lost heavily to Melbourne, Carlton and Collingwood with their Round 4 lost to West Coast the season’s darkest moment. Injury-plagued forward Brooke Lochland managed only two games and her protégé Bonnie Toogood started brightly before going down with a knee injury.

Throughout, it became apparent that time has moved on from several of their old hands, making the experience of their draftees even more important.

Time and faith. Two-thirds of the Bulldogs’ list is 25 or younger and across the season there was a marked drop in the reliance on foundation players. The changing of the guard was not without its growing pains (the young pups averaged just 1.7 second half goals as the wear and tear of AFLW took its toll) but the eyes were always on 2021.

Can you imagine how the Bulldogs will look with another year on the shoulders of the likes of key position players Huntington and Dani Marshall? With Blackburn and Lamb able to rely on Newton, Lagioia and Georgostathis? 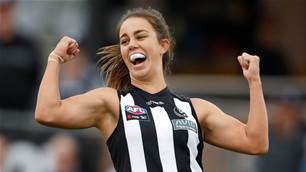