Many had them tipped as the premiership team in what would have been a cracking finals series displaying AFLW at a whole new level. Fans can hope that the Roos will be bring the same finesse and intensity to 2021 to see them bring the cup home.

After an inaugural season in which the Kangaroos failed to make finals despite having a list as strong as any, Scott Gowans’ team refused to die wondering in 2020.

North Melbourne’s midfield was beyond compare this season. The fiery Ash Riddell played the sort of season her 2019 was on track for prior to an ankle injury while captain Emma Kearney is set to join Melbourne’s Karen Paxman as one of just two players to receive four consecutive All-Australian blazers. That Gowans had players the calibre of Jenna Bruton and the pugnacious Ellie Gavalas to draw on in reserve speaks volumes about the muscle of the Kangaroos’ on-ball brigade. A nod needs to go here to Viv Saad, who was added to the list in late January after the pregnancy of Jess Duffin and played every game as her side’s first ruck to protect the injury-hampered Emma King.

However, the best player at North Melbourne – and perhaps anywhere – was Jasmine Garner. No one outside the four walls at Arden Street could have predicted that a move into the midfield would turn the 25-year old into the game’s premier player. Garner averaged 20 disposals, five marks, four clearances and a goal a game to earn favouritism for the MVP Award, with her performances against Gold Coast (30 touches), Adelaide (24 touches and two goals), GWS (20 touches and two goals) and Geelong (three goals) tipped as three-vote matches.

The midfield depth strengthened the Roos all over the ground. Winger Kaitlyn Ashmore was allowed to play as a deep forward, where she ran riot against Richmond and Adelaide, while Kate Gillespie-Jones could pinch hit in any key position as required.

Throughout the season, North Melbourne burned sides out of the middle with Richmond, Adelaide and Geelong serving as percentage fodder. A loss to the injury-weakened Melbourne in Round 1 was the only blemish in a season where the Kangaroos won often and won by a lot.

North Melbourne’s two-point semi-final thriller against Collingwood was its most significant of the season for two reasons. Not only had the Kangaroos prevailed in their first ever final, they had done what their critics, regardless of their top end talent, had suspected they could not: win when the going got tough. It’s hard to pick a hypothetical premier out of North Melbourne, Fremantle, Carlton and Melbourne in this aborted season but that win will put the Shinboners in good stead for 2021. 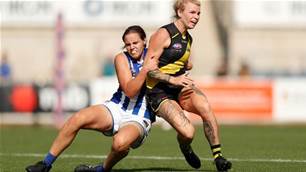