The 2020 season offered some peace for the Pies supporters that have waited patiently for their team to find its feet. They've begun a trajectory of improvement that, if continued, will see a dynamite team emerge to take on 2021.

After three years of disappointment, the planets finally aligned for Collingwood in 2020. The addition of Carlton captain Brianna Davey was not the catalyst for a sudden improvement as expected. Instead, it was the explosion of midfielder/forward Jaimee Lambert (first in the league for disposals, Inside 50s and contested possessions, and second in clearances) as well as career-best seasons from Britt Bonnici, Sarah Rowe, Steph Chiocci, Stacey Livingstone and Sharni Layton that saw the Pies record their first ever finals appearance.

There is also something to be said about the depth and versatility shown by Collingwood. The mid-season loss of premier defender Ash Brazill to a horrific knee injury was not as disastrous as initially feared. Stacey Livingstone’s emergence as one of the strongest key defenders in the game was bolstered by the confidence of Rowe, Lauren Butler and first-year player Alana Porter.

Up forward, the Pies looked more dangerous than ever with the returned pair, Jordan Membrey and Chloe Molloy, kicking a goal a game. The mercurial Molloy’s successful return to football after missing 2019 with a Lisfranc injury saw her lead the league in marks and gave coach Steve Symonds an extra option for a midfielder or forward.

Emphatic victories over Carlton (the first in Collingwood’s history), the Bulldogs and Brisbane led the Pies to finals where they let slip a chance to defeat North Melbourne in a hard-fought encounter at IKON Park. The only major blemish came in Round 4 when Melbourne stormed home in the second half a week after Collingwood had been pipped at the post by Fremantle in Perth.

Can Collingwood make its best the norm in 2021? There is no reason to question the fact that the precise, smart ball movement showcased against Carlton and the Bulldogs would push the Magpies into premiership contention. A second ruck to assist Sharni Layton, who was more than handy as a ruck-rover this year, will be top of the wish list during trade and draft period. Symonds and his team may also consider whether a tall forward is worth pursuing or if the mid-sized combination of Molloy, Membrey and Sarah D’Arcy is the way forward. 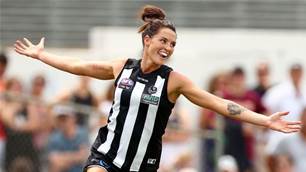