The Brumbies and Queensland Women have picked up important wins heading into the final round of the season.

The Brumbies have their first win of the season with a 37-8 victory over the Melbourne Rebels on Friday afternoon.

While the first half saw teams settle into the match it was the Brumbies who made the most of their opportunities as Darcy Read got the first try of the match.

The Brumbies continued to put the pressure on until the Rebels hit back with a penalty goal.

In the second half, it was all over for the Rebels as the Brumbies ran out four unanswered tries.

The Rebels fought hard until but injuries to key players saw them put of out action at critical moments in the game.

Queensland has come from behind to secure a 32-30 win against Western Force to themselves in the Super W Final.

They were off the mark early scoring two tries in the first seven minutes but from there the Force scored 13 unanswered points.

Young Courtney Hodder was also making her presence felt having been determined in the contest through the first half she was keen to get her hands on the ball and make some metres in the second.

Tries to Wickliffe and Fell moved the margin to 20 points and the Force looked to have all the momentum until another teen star of the competition, Lefau-Fakaosilea, ran in her second for the game setting Queensland back on the right track.

Sammy Treherne then took a pass with an outstretched hand and ran a full 70 metres for her second to bring the score to 30-20.

Just three minutes later and Treherne was in again running over half the length of the field, exploiting cracks in the Force defence which were beginning to show.

Lavinia Gould slotted the conversion to reduce the lead to just three points with ten minutes left on the clock.

Despite possession changing hands more than once, the ball rarely came out of the Force’s half as Queensland persisted in both attack and defence.

When it looked like the Force would hold on for the win, 19 year-old Lefau-Fakaosilea, broke the opposition’s heart with a determined run up the sideline to put in the try snatching a two-point victory for her team just before the whistle for full-time was blown. 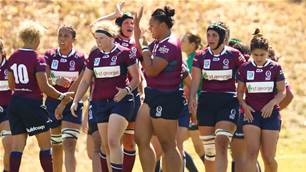