West Coast Fever captain Courtney Bruce will her miss second game of the 2019 season after failing to pass a fitness test.

Bruce, who injured her elbow in the opening quarter in Round 1, didn’t travel with the team to Sydney this morning.

Fever is yet to win a match this with losses to Adelaide Thunderbirds and Sunshine Coast Lightning in the first two rounds. They come up against the undefeated NSW Swifts on Sunday afternoon.

The club made the decision to not risk the defender with the Netball World Cup taking place in Liverpool this year.

“There’s no doubt we would love to have had Courtney available for selection, however, our number one priority is managing her health and wellbeing, so this decision has been made in the best interest of the athlete based on medical testing and player feedback.”

However, the club is hopeful that the 25-year-old will be available for the game against the Melbourne Vixens but Bruce will still need to past a fitness test.

Bruce is expected to be named in the squad despite missing two games with Swift Sarah Klau and Melbourne Vixen Emily Mannix being possible replacements. 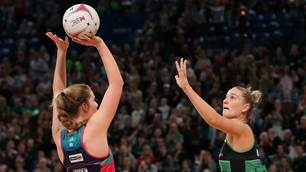