The two-time Suncorp Super Netball Grand Final champion and MVP of this year’s Grand Final match will spend the next three years in orange, joining recent shooter re-signings Jo Harten and Kiera Austin, to adding an host of options for Giants in the circle.

Bassett, 30, entered elite netball in 2005 with West Coast Fever and has played 183 national league games. For the last two years she has been a standout for Lightning in the circle.

She finished the 2017 SSN season as the most accurate shooter in the competition, with a remarkable 94% accuracy, while during the 2018 regular season, Bassett netted 553 goals from 601 attempts and registered 12 goal assists.

"I'm so thrilled to have signed with Giants for the next three seasons,” she said today.

“[This] is a fantastic opportunity for me personally and professionally and I’m excited to see where this new challenge takes me in the future. It’s such a great chance to further develop my netball career and I can’t wait to begin the journey.

“It certainly doesn’t hurt that I’ll be able to play under Julie Fitzgerald, who has done such an amazing job in building the Giants into real contenders over the last two seasons.

“Getting to play with my old Diamond’s teammate Kim Green is also something that I’m super excited about and I can’t wait to work with the likes of Jo Harten and Kiera Austin in the circle.”

“She is an incredibly gifted shooter and obviously brings with her a wealth of talent and experience, which we know will elevate the team in the coming season,” said Fitzgerald.

“With Caitlin’s versatile play and steady shooting, she will be a wonderful complement to our established attacking group.

“Her motivation, determination and off-court efforts as a positive role model are well-aligned with the culture and we believe she will be a great fit for what we are building.” 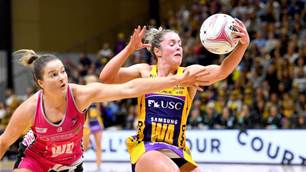