It has been a big seven months of Rugby Sevens for Australia's women's team and after the games were done, it was time to celebrate those who were the best in the 2017/18 World Rugby Sevens Series.

Ellia Green, who unfortunately has been injured the past three event legs, was awarded the Don't Crack Under Pressure gong for her try against New Zealand in the Sydney Sevens Cup final.

Australia, alongside New Zealand, had two players in the Dream Team with Evania Pelite and Emma Tonegato.

Tonegato was Australia's top try scorer (26) this series, third behind fellow Dream Team winners Portia Woodman and Michaela Blyde and was in the top 10 for most points scored.

“It has been another tremendous year for the HSBC World Rugby Sevens Series, which continues to go from strength to strength," World Rugby Chairman Bill Beaumont said.

The room is filling up with the men’s and women’s teams here at the #HSBC7sAwards in Paris.

“I hugely admire the skill and physicality of rugby sevens and thank the players for their outstanding commitment which makes the series such a success.

“Rugby sevens took a quantum leap when it joined the Olympic programme in 2016 and now we look forward to a Rugby World Cup Sevens in San Francisco in just 40 days time in an iconic city and a market with great potential,” he said. 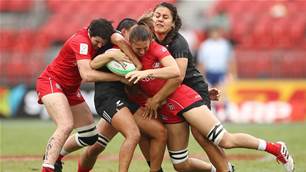 Sydney 7s down to pointy end