The all-female five person officiating team was announced for the 2022 AFC Women's Asian Cup final.  Four of the five women named are Australian and also work for Football Australia, named as A-Leagues officials.

For the third time in the history of the AFC Women's Asian Cup, an all-female line-up has been named to officiate.  This year's 2022 final will have four Australians and one Palestinian in charge of Asia's top tournament deciding match.

The five women were among the 39 match officials originally named to this AFC Women's Asian Cup, the largest officiating group appointed in the history of this tournament.

Casey Reibelt has been named as the final's match official, with fellow Australian Joanna Charaktis and Palestinian Heba Saadieh named as her assistant referees.  The Video Assistant Referee (VAR) will be controlled by Australian Kate Jacewicz with Aussie Lara Lee as her Assistant VAR.

The foursome have worked together before in this tournament. Lara Lee had been named as referee, Joanna Charaktis as her assistant, Kate Jacewicz as VAR and Casey Reibelt as assistant VAR for the Cup's semi-final match between China and Japan.

All four women were also named as A-Leagues' referees ahead of the 2021-22 season, assigned by Football Australia to various officiating positions in both the A-League Men's and A-League Women's.

The match between China PR and Korea Republic will be broadcast in Australia on 10Play, airing at 22:00 AEDT. 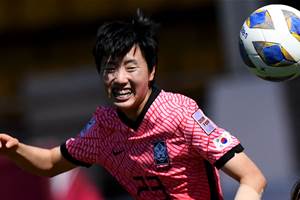 The Asian Football Confederation could have a new women's champions when China PR meet Korea Republic in the 2022 Women's Asian Cup final.