The Lions have been bolstered by the signatures of eight experienced players and a rookie for the 2020 season.

Rookie Brianna McFarlane has also re-signed and will aim to make her AFLW debut next year after a shoulder injury in December ruled her out for the entire year.

Collingwood’s 2019 Best and Fairest winner Jaimee Lambert heads a further list of five players to have signed fresh deals with the club.

Molloy was restricted to the sidelines in 2019 due to a Lisfranc foot injury but the 20-year-old will play VFLW in preparation for the 2020 AFLW campaign.

With four more teams entering the competition next year, Collingwood have opted to invest in the draft and build a critical mass of high-end young talent. 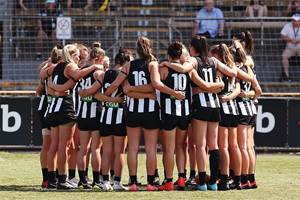 The five new signings join Steph Chiocci along with Sarah Dargan, Britt Bonnici, Ruby Schleicher, Erica Fowler, Sophie Alexander and Eliza Hynes, who were announced by the club on Tuesday.

“Securing 12 of our last years’ list validates that our women’s football program is solid and working,” GM of Women’s Sport Jane Woodlands-Thompson said.

“Our strategy was always long term and we’re thrilled to see our draftees re-signed for another year.”