I don’t know what hurts more; my calves after a day of football having not broken out of a trot for four months, or my cheeks from all the fun and laughter at today’s FEVER – Football for EVERyone Football-athon in Canberra.

I don’t know what hurts more; my calves after a day of football having not broken out of a trot for four months, or my cheeks from all the fun and laughter at today’s FEVER – Football for EVERyone Football-athon in Canberra.

Organised by Claire Falls, a terrific young football leader, in conjunction with Capital Football and Tuggeranong United Football Club, FEVER is an event like no other.

Teams consist of all age players and there might have been a four year old on the paddock, resplendent in goal keeping gloves and knee pads no less, and there were more than a few grey hairs in some of the teams.

Play is scored on which team shows the most respect, inclusion and encouragement and it was on display in spades.

The best part is really not worrying when the ball flashes past you into the goal, and celebrating both teams' silky skills.

It’s a stress-free form of football that I enjoyed last year, and am completely hooked on now. 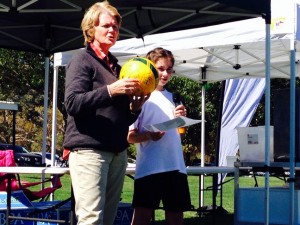 It’s completely affordable at $5 registration for the day, and even the sausage sandwiches were at 1972 prices.

All the money raised goes to Capital Football’s disability program.

The manager of the program Merryn Brown was there to run the day, and Capital Football CEO Heather Reid AM was on hand to help with the auction.

Even the newly announced Canberra United coach Raeanne Dower dropped in to check out the talent – hope you bring your boots and your team next year Rae!

There were some fantastic auction items. Claire was super generous to donate the Asian Cup ball she was given by CEO Michael Brown thanking her for being an ambassador, signed and framed Canberra United jerseys and a corporate box and the last Sydney FC match of the year.

The big one was a signed Socceroos’ ball that FFA CEO David Gallop gave Claire last week on the occasion of their press conference, announcing that the Pararoos would be reinstated and the program for footballers with a disability would be expanded over time.

In true FEVER style, Claire’s auntie bid for and won the ball and gave it straight back to Claire in scenes similar to last year when Claire’s Pop purchased and returned Moya Dodd’s FIFA watch back to the generous young advocate.

There is talk that Tasmania is on the cards to host an event later this year and I urge all state federations to get on board the FEVER train.

This is football with all the barriers down and all the fun at full pitch.

Thanks Claire – to you and all of your family for welcoming us.

Thanks to all the football family who donated great prizes for the auction, and to the great crew who came to play… thanks for the game.