Amy Jackson is the player that every good team needs; a steady and reliable player who always get the job done.

Like many W-League players, Jackson's football voyage started with another of the football codes which, like a true Victorian, was AFL. Once she aged out of AFL at 12, a primary school teacher directed her to football and, as the saying goes, she has had never looked back.

Victorian State teams and Young Matildas (including the 2006 FIFA U20 Women's World Cup) and three seasons with the Victory all followed in quick time before Jackson took a break from the W-League in Season 6.

Back again, Jackson continues to be somewhat of a quiet achiever for Melbourne Victory, but don’t let that fool you. The 27 year old Jackson is an accomplished football player and businesswoman with a thirst for learning.

Welcome back to the W-League Amy. Tell us about what you got up to in your season away.

At the conclusion of the 2013 season, after our Grand Final, I headed over to Fiji. Originally I was heading over on a 12 month contract and I actually finished up my volunteer assignment in six months.

I purchased a one way ticket to Europe, so I was living and travelling Europe for 10 months. I ended up playing football over there with SC Buitenveldert.

I based myself in Amsterdam. So a few months ago I was sleeping on a floor, playing football and we actually won a national championship over there. Not many people know that I didn’t really stop playing. I was just playing in a different environment.

What was involved in your volunteer assignment in Fiji?

I went over to work with Cricket Fiji which is affiliated with the International Cricket Council and just in the community development work within special schools and within the female population over there.

It just reiterated to me that sport unites people and that to me is what football is about as well, having a kick around with your friends.

I think you can play at many different levels but at the end of the day you’re running around playing sport you love with friends by your side.

You were also a semi finalist in the 2013 Victorian Young Achiever Awards which recognise the great work young people are doing in local communities. How do you combine and fit in everything?

I have many interests in life and I’m an avid studier, business owner and I don’t mind working hard so while I’m playing football I’ve got a lot of things going on outside of the sport as well.

I was very fortunate to be a finalist in 2013 just prior to leaving for Fiji as an Australian youth ambassador for development. I was recognised which was very humbling.

I work hard and I’m not afraid to do that so just going above and beyond what’s expected of me, that’s just how I have been brought up. I’ll think things through and try and look at the details and apply that to situations both on and off the football field.

What brought you back here and back to the W-League? 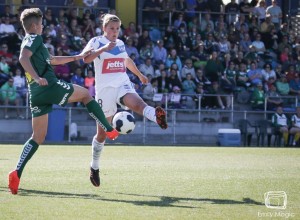 My family and friends are based in Melbourne and I had been away for 15 or 16 months in total so it was the right time for me to come back and get in touch with everybody again. I’m also studying so it has allowed me to concentrate on that a little bit more for this semester too.

That has been a big focus of mine and of course now that I’m playing in the W-League, that’s a big commitment too so I’ve had to strip back everything else and I’m concentrating on my football and my studies at the moment.

Combining football and travel seems to be a passion of yours. You also played football in the American College system with Florida International University. How did that come about and what was the experience like?

I had a friend of mine who was going over in 2007 and jokingly I said “Oh, get me on board” and the next thing I knew there was a college team that actually had flown out to Australia to have a look at her and they jumped on board and came to Melbourne and had a look at me as well.

It was just after the World Cup so I had a little bit of momentum in my playing. The next thing I knew I was offered a scholarship, not by the team that came out, but by another team who the assistant coach actually worked with the team that was in Australia so without seeing me play or without knowing me I was offered a scholarship over to Miami.

What did you learn from that experience particularly in comparison to Australian systems?

I think the development system in the States is very interesting. I think there are more pathways for women, for females in the game and a big emphasis is on the educational side as well. So while you’re playing top flight football, you’re also getting educated and I think that’s one thing that we lack here in Australia, combining the two.

To me, education is the second most important value of mine, just below my family. So to be able to combine education and sport, I think that’s where they have the benefit, or should I say the advantage over the rest of the world.

As a female athlete, there are a number of challenges you face particularly financially and time. How do you combat that?

I’m aware of the reality that female sport is tough. It can be a tough industry to be a part of, but you know what, going into that and as a female athlete, I knew that from the beginning so I set plans in motion to actually cater for that.

While I’m playing football I’ve been studying and establishing my business and I’ve had the plan from the get go. I think it would be amazing to see institutions, like the VIS (Victorian Institute of Sport) for example, implement the educational pathways.

As a younger player, who did you look up to?

Growing up I always admired Marta for her professionalism both on and off the field. She’s an amazing player, but then you also look at the organisations she works [for] outside [of football]. UNICEF for example and just the extra hours she puts in to promote the game. I think it’s fantastic for women’s football.

What are your thoughts of the younger players now? How do they improve, challenge or change your game?

So far this season, how do you think Melbourne Victory are tracking?

It took us a long time to gain some momentum and actually start playing football. I think in the second half we were actually stringing some passes together and creating opportunities but it just took a little bit too long.

I think after the loss in Round 1, we were hungry to get a result [against the Wanderers] and in order to achieve our goals of actually winning and retaining the championship this year, we had to work hard and we had to give everything.

What are the expectations the team have for this season?

The expectations are high for us. We want to improve continually throughout the season, but we also want to back up last year’s win.

We’re heading to Japan as well for the World Club Championships and that’s a big focus as well. We’re not going over just to play. We’re actually going over for results.

There are a few changes to Melbourne Victory this season including a different coach (yet again) and a few new players. How is the team connecting?

We have quite a unique group. We’ve got some characters but within the group, everyone gets along and away trips it’s always a good time.

I like rooming with the pop star of the team, Maika Ruyter-Hooley. The day that girl actually has to do give an interview is going to be a highlight for me!